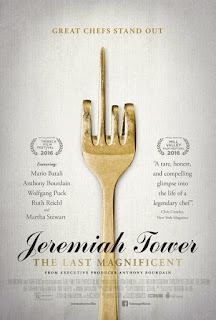 JEREMIAH TOWER: THE LAST MAGNIFICENT begins by recounting the "poor little rich boy" childhood of future chef/restauranteur Jeremiah Tower. His parents seem to have had little interest in their progeny, leaving him more or less to his own devices whether on luxury cruises or back at home throwing fancy dinner parties. It was during this stage of his development that young Jeremiah began to first take an interest in all aspects of the dining experience; not just the food itself, but the menus, the decor, the whole 9 yards.

From there the film moves on to Jeremiah's college years, his first real job as a chef working at Chez Panisse in California, his rise and fall running the hugely influential restaurant Stars, and his recent attempt at a comeback in New York. There are hints of sex and drugs and people "out to get" Jeremiah throughout, but either the stories weren't that exciting or, more likely, Tower is too private a person to delve too deeply into that territory.

So the film is left to present us with a road for its subject in which even the bigger bumps tend to be glossed over. Even Tower's feud with Chez Panisse owner Alice Walters comes across as relatively dull, when it's one of the most crucial moments in his career. Tower recounts most of this himself, with old friends, co-workers, and other celebrity chefs (including Anthony Bordain and Mario Batali) chiming in, as well.

If you're a hardcore foodie with an interest in the evolution of American cuisine and the rise of the "superstar chef", there may be enough here to hold your interest. It's hard to imagine more casual viewers finding much here that's compelling enough to warrant their investment of time, though. 2 ½ out of 4 stars.