I, Olga Hepnarova (May 18th and 19th at the Cleveland Cinematheque) 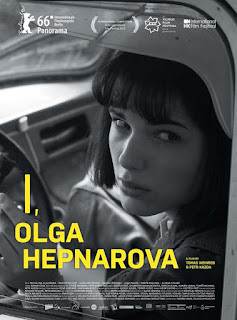 In 1975, Olga Hepnarova was the last woman executed in Chechoslovakia. To avoid spoilers, I won't mention what she did, but the film I, OLGA HEPNAROVA is more concerned with why she did it.

Michalina Olszanska turns in a nicely restrained performance as the troubled young woman, who grows increasingly isolated from people after attempting suicide.

Olga manages to land a job, starts a fling with a female coworker, and begins to loosen up. For all her quietness, Olga sometimes displays a sexual voracity as naive and inappropriate as her other social interactions. When she is cruelly dumped, Olga again tries to make human connections, despite the fact that socializing is largely torturous for her.

While she openly pursues professional help, she seems to have slipped through the cracks of the mental health system.

Olszanska, who was also excellent as a murderous mermaid in THE LURE, again brings a dark, kittenish sexuality to the screen, but here she is more meek, awkward, and androgynous. A performance that is largely nonverbal, she plays Olga's mental illnesses with subtlety and brings an unhinged electricity to her furtive glances and displeased snarls, as Olga becomes more spiteful of the human race.

Despite the actress' fine work, the script by writers/directors Tomas Weinreb and Petr Kazda doesn't quite get to the core of Olga's issues. The audience certainly feels her isolation, but her need for vengeance seems a bit out-of-left-field.

In a way though, even this shortfall works...somewhat. In the film, Olga talks about the inability of anyone to truly know or connect with another human being. She herself is someone who floats through existence, brushing up against others, but never actually forming a bond. It's as if the directors are saying there is no way to ever really know why Olga made her fateful choice.

The themes of disconnection and loneliness are captured beautifully in the crisp, luminous black and white cinematography by Adam Sikora. Olga is frequently shot in her own space or from the back. Unless for sex or violence, she rarely comes in physical contact with anyone. Framing and deep staging further point out the spaces between people. There is almost always a long table separating Olga from her doctors, lawyers, or family members.

It's a cold, almost clinical approach that is expertly echoed with the pervasive long wide shots. The camera frequently sits at a distance - objective and unsentimental - far enough away to capture a whole scene and then let it play out with few or no edits. It's a style that can feel as frigid as Olga's mother, but achieves its goal of making the audience feel as disenfranchised as Olga.

The major complaint may be that by the end, the audience doesn't have any better understanding of the whys of her crime, other than to conclude that she was probably schizophrenic.

I, OLGA HEPNAROVA is a skillfully shot character study with style to spare, but the examination of Olga's inner demons doesn't quite delve deep enough. For a woman who never felt like the world really understood her, maybe this is as close as we can ever get. 3 out of 4 stars
Posted by Unknown at 10:12 AM