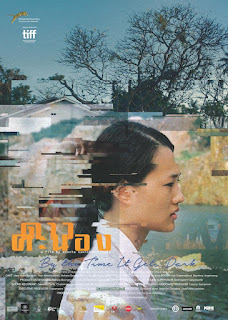 BY THE TIME IT GETS DARK is the kind of movie that might put you under its spell, put you in a state of confusion, or put you to sleep. Any of those reactions seems equally valid. There aren't a lot of films one can compare it with, although with its poetic sensibilities, at times seemingly irrelevant digressions, and a dark center dealing with an act of extreme political violence in a country's past. Maybe to some degree Patricio Guzman's documentary NOSTALGIA FOR THE LIGHT, but ultimately this is its own peculiar animal.

The starting point and core of Anocha Suwichakornpong's film is the 1976 massacre of student protestors at a Bangkok university. A filmmaker ((Visra Vichit-Vadakan) is preparing to make a movie of the incident, and as part of that preparation she wants to interview one of the few protestors who survived, Taew (Rassami Paoluengton). It seems as though this is what the movie will be "about".

The film then goes off on various tangents, with characters and situations only loosely connected to each other. Sometimes actors play different characters. Some scenes are restaged. One vignette touches on psychic powers. At one point there's a typically nonsensical MTV style music video. There are clips from Melies "A Trip to the Moon" that lead into a bit about growing mushrooms. The staging that goes into making a film is a recurring theme, and several of the vignettes start out appearing to be "real" before the camera pulls back to reveal they are "staged".

I don't pretend to fully understand this film. Nor can I truly say I enjoyed it. And yet, its quality is undeniable. It's as fine an example of a personal work of art as one could hope for in any medium. Just perhaps a bit too personal and impenetrable for most viewers. Adventurous art house fans, however, will want to check it out. Whatever their reactions, I expect they'll have plenty to talk about afterwards.   2 ½ out of 4 stars.
Posted by Bob Ignizio at 12:00 AM