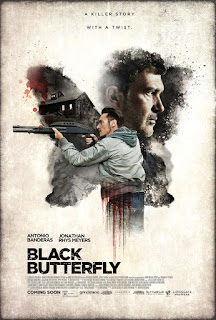 Ah, the old "author struggling with writer's block" setup. And of course, he's holed up at a cabin in the woods as he tries to get the creative juices flowing again.

In this case, the writer in question is Paul (Antonio Banderas). He's working on a screenplay, and despite being asked to make changes by the studio, he's reluctant (or unable) to do so. This is a problem, because he needs the cash. The only other promising source of financial relief is if he can sell his house, but so far his realtor Laura (Piper Perabo) isn't having much luck.

Enter another cinematic cliche – the dangerous yet alluring drifter – in the form of Jack (Jonathan Rhys Meyers).Jack helps Paul avoid a fight at the local diner, and soon has wormed his way into Paul's life, staying at his cabin and offering suggestions on the screenplay.

Eventually, and predictably, things take a dark turn. Jack has a criminal past, and frankly doesn't seem to be fully reformed. At first his behavior is just kind of unnerving, but soon it escalates to keeping Paul and Laura hostage and killing anyone else who is unfortunate enough to stop by the cabin for a visit.

Despite a first rate cast, BLACK BUTTERFLY never rises above second rate generic thriller territory. Ironically, the biggest problem area is in the writing department. Despite attempts to keep things interesting with would-be twists and turns, this just isn't anything we haven't seen before. It might not be a bad way to kill 90 minutes at home when it eventually hits Netflix, but outside of hardcore Antonio Banderas fans it's hard to recommend seeing this at a theater. 2 out of 4 stars.