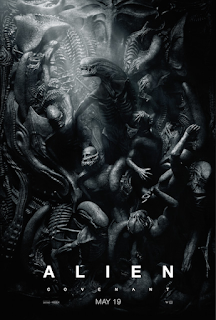 Ridley Scott's PROMETHEUS proved to be a divisive film for fans of the ALIEN franchise. Personally I liked it, but I get the criticisms. Despite a great cast and some interesting ideas, there were some definite problems with the film's script. And for many, it didn't help that there wasn't much alien for an ALIEN movie.

For his follow up, ALIEN: COVENANT, it feels as if Scott has given in to the complaints and tried to "give the people what they want", while still indulging his thematic musings on the origins of intelligent life and the nature of good and evil.

The plot follows the titular spacecraft as it sets off to colonize a new world. After an accident, android Walter (Michael Fassbender) wakes the crew from their cryo sleep early. Sadly, he is unable to prevent the death of the expeidtion's commander and a few random colonists whose pods malfunction.


While fixing the damage, Tennessee (Danny McBride) picks up a strange transmission of a woman singing John Denver's "Country Roads" on his helmet.The ship's computer identifies the source of the transmission as a habitable planet considerably closer than the one the Covenant was heading towards. Since no one is keen on getting back into the pods at this point, new commander Oram (Billy Cruddup) decides they should go check it out, with an eye towards colonization. Second in command Daniels (Katherine Waterson) isn't so sure that's a good idea.

Most of the crew go down to the planet to investigate, and it doesn't take long for a couple of them to wind up infected by a prototypical version of what will become the xenomorph ALIEN fans know and love/fear. Also on the planet is David (Fassbender, again), the android from PROMETHEUS. David offers the crew safety and shelter and explains the situation, but he's clearly not telling them everything. It isn't long before the cast start getting picked off in predictable fashion.

Unfortunately, it's hard to care, as the only interesting characters in the film are both played by Fassbender. His Walter and David represent two sides of the same coin, and most of the film's thematic heft rests on his shoulders. Danny McBride makes an impression, of course – he's not the kind of actor to just fade into the background, even in small roles. Waterson turns in a respectable performance, but whether due to her character coping with grief, or simply being underwritten, she never really registers as an interesting protagonist. Ellen Ripley, she is not.

Look, ALIEN: COVENANT is not a terrible movie. But it's not anything special, either. It feels very much calculated to play it safe, putting Scott's more substantive ideas into a cookie cutter framework that feels about as fresh as a FRIDAY THE 13TH sequel. And like a FRIDAY THE 13TH sequel, there's no doubt many viewers will be perfectly happy with a polished retread. It's just hard to imagine anyone having as strong a reaction to this as fans had to the original or James Cameron's sequel ALIENS (or even PROMETHEUS). 2 ½ out of 4 stars.