[UNTOUCHABLE screens Thursday April 6th at 6:30 pm, Friday April 7th at 11:30 am, and Saturday April 8th at 9:15 am at Tower City Cinemas as part of the 41st Cleveland International Film Festival.] 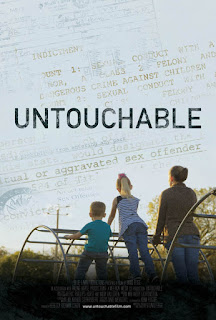 The term "sexual predator" conjures up images of a monster for most people. That mindset is perhaps best exemplified in David Feige's documentary UNTOUCHABLE by Ron Book, a lobbyist by trade. And one can certainly understand why he'd hold that view – his daughter was molested by her nanny. Since then, Mr. Book has made it his life's mission to keep sexual predators off the streets. For those who do get out of prison, he wants to make life as difficult as possible. And thanks to all his political connections, he's been very successful doing just that.

So what's the problem?

UNTOUCHABLE argues that if we look at the situation based on facts rather than emotion, there are actually a lot of problems with Book's approach. This isn't just the opinion of some bleeding heart liberal filmmaker. Some victims and parents of victims also feel there are better ways to deal with predators than punishment alone.

Unless we want to change sentencing laws so that those convicted of sexual offenses go to jail forever, they are eventually going to get out. And if they have served their sentence and keep out of trouble thereafter, is it fair to keep punishing them? This, of course, is part of a larger issue with our criminal justice system in general. But if you think it's hard finding a job or housing with a robbery or assault conviction on your record, imagine if the crime you've been convicted of is one that comes with the label "sexual predator". A label that, in some states like Florida, can be plastered right on your driver's license.

It's understandable that viewers may not feel sympathy for most of these offenders. But what about those like the woman who, while still a teen herself, had sex with a younger teen and wound up branded for life because of it? Now a mother of two living in Oklahoma, a law there makes it so that she can't even take her kids to the park. Does that really serve anyone?

And then there's the common wisdom that sexual predators are highly likely to offend again if released. Most of the harshest laws dealing with predators are justified based on this notion, and chances are you believe it. I know I did. This is where the whole "facts versus emotion" issue really comes into play. Because the actual scientific evidence, at least as presented here, shows this belief to be erroneous.

Now let's be clear. If someone ever molested my kid, I have no idea what I might be capable of doing to that person. That's the emotional side of the issue, and that's why this country has opted for the rule of law rather than vigilante justice. So it's easy to understand why Ron Book and those who agree with him feel the way they do. But after watching UNTOUCHABLE, you might also be able to see why others, including Ron Book's own daughter, aren't as gung ho to subject offenders to a draconian cycle of life-long punishment.

This is not the sort of viewing experience most people seek out in a film. But for those willing to have their beliefs challenged about an unpleasant but nonetheless important subject, UNTOUCHABLE is well worth seeing. 4 out of 4 stars.
Posted by Bob Ignizio at 12:00 AM