The Void (April 11th and 15th at the Capitol Theatre) 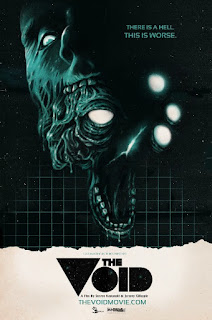 A siege by mysterious cultists. A mad doctor conducting unholy experiments. Characters cutting the skin off their own face, then transforming into Lovecraftian tentacle monsters. Gore and creature effects alike realized as physical, on-set creations rather than being cooked up in a computer. Yeah, there's a lot in THE VOID for fans of old school horror to like. So much that its easy to imagine many viewers forgiving the film's narrative and thematic shortcomings as warm waves of nostalgia engulf them.

The basic plot is like a combination of NIGHT OF THE LIVING DEAD and PRINCE OF DARKNESS. A group of disparate characters hole up in a hospital surrounded by white robed cultists. There's danger inside, as well. The aforementioned mad doctor and monsters are troublesome, to be sure, but perhaps just as dangerous is the mistrust among the would-be survivors.

Very little of this is new or fresh. Memorable scenes and core ideas from other films are recycled and restaged, and eventually, just about every trope of low-budget eighties horror and sci-fi gets trotted out. John Carpenter and George A. Romero are the two biggest influences, but Lucio Fulci, Stuart Gordon, David Cronenberg, and Clive Barker are get shout-outs, as well.

Co-writers/directors Steven Kostanski and Jeremy Gillespie clearly have a love for this type of film, and a fair amount of talent behind the camera. They're helped by a solid cast, and some cool looking creature and makeup effects which are on prominent display. That only carries THE VOID up to a point, though.

Where the film comes up short is in the writing department. I've watched and enjoyed too many films by Quentin Tarrantino and Robert Rodriguez to slam THE VOID too hard for wearing its influences on its sleeve. It's the connective tissue that ties these "greatest hits of 80s horror" moments together that's the real problem. There's a tendency to shortchange characterization and making sure the plot is clear in favor of rushing to the next FX set-piece. As a result, THE VOID can feel sloppy and difficult to follow at times.

Which, of course, can probably be said of many of the films that inspired THE VOID.

Flaws aside, I enjoyed the film for what it is. It's not a masterpiece, but as nostalgic trips go, it's not too bad. I imagine it will be even more fun in a theater with a receptive audience than the way I experienced the film at home via VOD. 2 ½ out of 4 stars.
Posted by Bob Ignizio at 3:01 PM