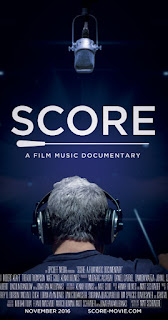 As SCORE: A FILM MUSIC DOCUMENTARY points out early on, the movies have never truly been silent. Even in the earliest days of film exhibition, they were accompanied by music. At first this was just a practical consideration; a way to cover up the sound of the film projector. But in time, scores would be written specifically to go with a particular film, the music often serving to help emphasize certain emotions or actions depicted onscreen.

Written and directed by Matt Schrader, SCORE spends only a brief time on the silent era, when scores were generally performed live by an organist. Its main focus is the advent of recorded sound in film, when film music started being fully integrated with movies. It's an interesting and sometimes surprising history. For instance, we learn how it was KING KONG that first truly showed the power of a good orchestral score to improve a film.

Traditional orchestral scores, whether rooted in classical music or jazz, are given the most screen time in SCORE, and that's arguably as it should be. When the average moviegoer thinks of film music, they probably think of a pieces by Bernard Herrman, Henry Mancini, John Williams, or Elmer Bernstein.

But there's more to film music than that, and SCOREdelves into some of those areas. Just not as deeply as I might have wished. The influence of rock and the avant garde in the sixties and seventies is represented by John Barry's JAMES BOND work, Ennio Morricone's theme for THE GOOD, THE BAD, AND THE UGLY, and Jerry Goldsmith's atonal score for PLANET OF THE APES, but frankly that just scratches the surface of the nontraditional sounds that came out of the era. Morricone alone was responsible for a huge body of work during that time that pushed the boundaries not just of film music, but of music, period. But all we hear about here is that one spaghetti western.

The film's subjects are also extremely white. This is partly due to the fact that film composing has largely been the domain of white artists, but there are nonetheless a number of important non-white composers. At least Quincy Jones pops up a few times, but to not even mention the iconic Isaac Hayes score for SHAFT, let alone more modern film composers like RZA, seems a glaring omission.

SCORE fares much better when it comes to undisputed giants of mainstream Hollywood film music. The film spends a good deal of time on John Williams, and deservedly so. Danny Elfman and Hans Zimmer are also given their due. But even in these cases, it sometimes feels as if SCORE is only scratching the surface.

Oh, and where the heck is John Carpenter in this thing? He's one of the few directors who scores his own films, and his work as a composer has been extremely influential.

So yeah, there are definitely some gripes about what's not here. But what is here is good, and serves as a decent introduction to the world of film music. So with some caveats, I recommend checking this out. If you're a serious film music junkie like me, though, you may well find yourself wishing for more. Hey Netflix, miniseries, maybe? 2 ½ out of 4 stars.
Posted by Bob Ignizio at 12:00 AM