Repost: Showgirls (April 7th and 8th at the Cleveland Cinematheque) 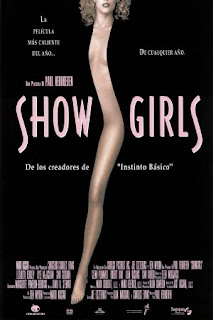 I remember when I first saw SHOWGIRLS, and no, it wasn't at band camp or computer camp or church camp like you rotten children Googling this at home. Back in 1995, when there was a better economy (don't get too nostalgic; it never trickled down that much to Cleveland), I actually possessed some standing in the local entertainment press, and I attended a cloistered, media-only SHOWGIRLS preview in an elite small venue where normally only Cleveland-area exhibitors get exclusive looks. No, not a "private booth," but not much larger than a private booth (assuming I know how large a private booth is, which I only do from dirty-bookstore shootout scenes in cop flicks). I and a handful of other reporters were jammed in there, and when the lights went up you could cut with a knife the pure hatred hanging in the air, directed at - no, not LeBron, too early for him - but at local-journalist-turned-hotshot-scriptwriter Joe Eszterhas.

(Of course, this was all before Joe E. actually moved back here, to dwell in Bainbridge. These days, SHOWGIRLS notwithstanding, Joe Eszterhas would be handed the Cleveland Arts Prize, as long as he helped sell ad slicks for the awards-ceremony program guide. And perhaps bring along his good friend Mel Gibson.)

SHOWGIRLS, of course, was notorious even before premiering. What people might forget now is that the picture was the big test-run of the MPAA's "NC-17" rating for strict adults-only material. NC-17 labels had gotten stamped previously on some arty/indie films like HENRY AND JUNE, the type that play at the Cedar Lee, but this was the first time an NC-17 mainstream-studio blockbuster went nationwide with a full newspaper-ad blitz. Since a lot of flyover-country media saw no difference between an NC-17 and utter porn and refused to run ads for NC-17 (or even unrated) pictures, the success or failure of SHOWGIRLS would determine how Hollywood handled future films meant for strictly adult mentalities.

Maybe if the big NC-17 test-case, as a film that absolutely no children ought to see by law, had been SCHINDLER'S LIST or SAVING PRIVATE RYAN or MARMADUKE (my opinion, that last one), things might have been different. But any lesson that NC-17 movies need not be schlock-porn was lost when director Paul Verhoeven, not a dumb guy, reuniting with his BASIC INSTINCT writer Eszterhas, also not a dumb guy (would'ja believe his dialogue name-checks Alvin Ailey?), ended up making what amounted to a big-budget porno. Sure, one with a plotline ripped off from ALL ABOUT EVE, but still schlock-and- awe raunch. Topless, bottomless, pantiless, and valueless.

Crystal (Gina Gershon), the haughty star who headlines in "Goddess" finds out about Nomi and loses no opportunity to try and humiliate the hopeful newcomer, as Nomi rises through the ranks of topless-showgirl-dom and is drawn into an affair with Crystal's steady boyfriend (Kyle MacLachlan), a powerful casino executive.

Unlike what I assume to be most of the stuff reviewed by Adult Video News (I wouldn't know; I've never worked there. Anyone know if they're hiring?) there is a theme in the Verhoeven-Eszterhas mise-en-scene, about a strong woman holding onto her integrity (and, occasionally, her breasts), and not lowering herself to become a "whore" even though mired in the topless sex-show trade. The plot pretends to be an "ethical" story of an indomitable lady not getting dragged 100 per cent into degradation and exploitation - but hey folks, this is about topless Vegas dancers (she bails at about 98.05234 per cent degradation). The mileau is so sleazy that practically everyone's a whore, so there. Nomi's biggest moral victory: abandoning her topless career to avenge (toplessly) her one true friend Molly. And there's a sub-message, that skanky strip-club Cheetah's and its douchebag proprietor (great character actor Robert Davi) are at least honest and upstanding about what a filthy business they're in - much more so than the treacherous culture of the upscale casino-palaces.

Of course, despite its pretensions (or perhaps because of them), SHOWGIRLS got roundly jeered by all critics, even me (yes, Cassady didn't go for it, bet that broke Eszterhas' heart. Anybody know if he's hiring?). At least Roger Ebert said the pic was bad but never boring, and that's the right call. And, along with the can't-believe-what-you're-seeing dance routines, it's probably the reason that SHOWGIRLS has gone on to become a cult movie. And if there's going to be marathon toplessness for the sake of "art," one could do worse than Elizabeth Berkley, Gina Gershon and the other lovelies who will never be your girlfriend, don't even think of it..

...Though I wonder if fans are ever confused by the fact that when it went to video the distributor toned it down with a hard-"R" version as well as the original NC-17 cut, in slightly variegated video boxes. I've yet to compare the two directly (still waiting on Adult Video News' looking over my resume) so can speak no further on the matter. But I'm sure we can all agree, that after SHOWGIRLS, Cleveland's Horseshoe Casino seems less interesting indeed. (1 ½ out of 4 stars)
Posted by Bob Ignizio at 12:00 AM