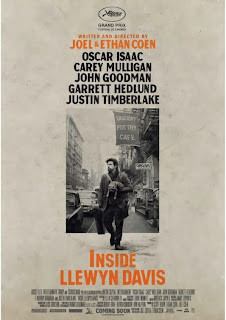 “The film doesn't really have a plot. That concerned us at one point; that's why we threw the cat in.”

That's what Joel Coen, one-half of the Coen brothers, has said about their latest offering, INSIDE LLEWYN DAVIS. It's the kind of dismissive statement we've come to expect in Coen Land, where deep analysis is considered laughable. In 2001, I wrote in a profile of Ethan Coen:

With the Coens, it’s easy to fall into the trap of overanalysis. They long ago confessed their infatuation with the novels of James M. Cain and Dashiell Hammett, but Ethan says critics overestimate their literary influences. 'They read too much into it,” he says. 'We’re presumably these movie brats. They mention movies that we’re supposed to be influenced by, which we haven’t seen.' No doubt that’s because the Coens’ movies revisit and reinterpret a wide range of popular film styles. 'To be fair, we seem to invite that kind of exegesis, especially with Barton Fink. But you do stuff because it feels good for the story. There’s no code.

INSIDE LLEWYN DAVIS is set in the Greenwich Village music scene of 1961, a world of coffeehouses, cigarettes and guitar-toting troubadours riding the folk-music zeitgeist just before the advent of Dylan. The movie follows the peregrinations of Llewyn Davis, a bearded young folkie cycling through friends' couches in the Village and trying to catch a break in the music world.

The cat, who follows Davis (Oscar Isaac) from the apartment of his professor friend (Ethan Phillips), is named Ulysses, suggesting that like the Coens' O BROTHER, WHERE ART THOU, this is a Joycean day in the life, animated by encounters with various eccentric types. Or, or....maybe the cat is the film's Maguffin (or McFluffin), meaning nothing at all. The orange tabby becomes Davis' traveling companion as he wanders from apartment to apartment, and from New York to Chicago and back.

Davis used to be one half of a popular singing duo, but his partner died, and his solo record, Inside Llewyn Davis (whose cover art is a homage to the album Inside Dave Van Ronk), hasn't sold, and his agent, an aging relic descended from a long line of Coen old-men-behind-desks, won't lend him money (though he does offer him his overcoat). Davis' sister, the joyless Joy (Jeanine Serralles), disapproves of her brother's music career and urges him to ship out with the Merchant Marine.

The story is based, very loosely, on The Mayor of MacDougal Street, the posthumously published memoir by Van Ronk, the legendary paterfamilias of the early-'60s New York folk scene. Davis performs some of Van Ronk's songs in the film's Gaslight Cafe, notably “Hang Me, Oh Hang Me” and “Cocaine.” Isaac's vocals are no match for Van Ronk's grizzly authenticity, but then the movie isn't really about Van Ronk. The book's co-author, Elijah Wald, said the Coens “mined it for local color and a few scenes.” There are echoes of Van Ronk's life; he did, for instance, sail with the merchant marine. The Coens have an unusual relationship with source material; they either adapt it with slavish faithfulness (TRUE GRIT, NO COUNTRY FOR OLD MEN) or largely ignore it.

Contrary to the film's marketing, it isn't really about the '60s folk scene and doesn't try to evoke nostalgia for it, though the actors perform several folk staples (“500 Miles,” Tom Paxton's “The Last Thing on My Mind.”) Generally speaking, the early folk scene continues to elude filmmakers; they don't know what to make of it. Christopher Guest's A Mighty Wind, which tried to satirize the folkies' corny earnestness, was pretty weak tea. A better sense of the scene is captured by the documentaries PHIL OCHS: THERE BUT FOR FORTUNE and GREENWICH VILLAGE - MUSIC THAT DEFINED A GENERATION.

The design and photography are where INSIDE LLEWYN DAVIS really excels. The Coens' favored cinematographer, Roger Deakins, was unavailable (filming SKYFALL), so they enlisted Bruno Delbonnel, whose work here is impressive: shadowy alleyways, gleaming nocturnal landscapes and a brownish, Instagram palette. But the screenplay, written as always by both Coens, is a little uninspired. This is particularly evident in the character of Jean (Carey Mulligan), the pretty, dark-haired half of Jim (Justin Timberlake) and Jean, who play and sing together, á la Ian and Sylvia, at the Gaslight. They draw a big crowd because, the sleazy club owner explains, “Guys want to fuck Jean.”

Jean has, in the past, slept with the wastrel Davis, who often crashes on Jean and Jim's couch. Now she plainly detests Davis, and her dialogue in scenes with him consists almost entirely of “Fuck you” and “You're an asshole.” Not exactly the absurdist wit we expect from frères Coen, though it's consistent with their abidingly sour view of male-female relationships.

Of course, there are some wryly amusing scenes. Davis gets hired as a session guitarist at a recording session for a novelty song by by Jim (of Jim and Jean). The song is called “Please Please Mr. Kennedy,” and its lyrics protest, “I don't want to go into outer space,” punctuated by goofy “Uh-oh's.” The group is billed as “The John Glenn Singers,” and the song sounds like just the kind of topical pop-folk that might have sold in the '60s — it sounds, in fact, like late-'60s space-agey Roger McGuinn.

Another rewarding sequence has Davis playing one of his songs for music impresario Bud Grossman (read: Albert Grossman, Dylan's manager), in hopes of getting representation. Grossman, played by F. Murray Abraham, delivers a dour assessment of Davis' music that is entirely realistic. John Goodman also shows up, this time as a junkie jazz musician with whom Davis shares a car ride to Chicago. It's another over-the-top Goodman performance, and fairly entertaining, though it adds nothing to the narrative and feels disturbingly like shtick. (Contrast this with Goodman's indelible performance in BARTON FINK: “I'll show you the life of the mind!”)

This movie is not BARTON FINK, or A SERIOUS MAN, which were eccentric and quasi-operatic in their explorations of big themes. Davis has a few things to say about artistic integrity and not selling out, but one senses the Coens' hearts aren't really in this story. It's minor Coen Brothers — but even minor Coens is better than none. Hey, I'm one of the few people who loves BURN AFTER READING. 2 3/4 out of 4 stars.
Posted by Bob Ignizio at 12:00 AM