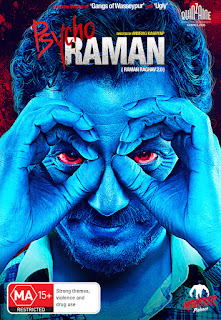 The Indian film industry is best known for their vibrant "Bollywood" musicals. Indian writer/director Anurag Kashyap makes very different kinds of films. His 2012 film GANGS OF WASSEYPUR was an epic (5 hours-plus) tale of generation-spanning crime that drew from Scorsese and Coppolla for inspiration. It won numerous awards and made it onto many "best of the year" lists.

PSYCHO RAMAN (original title: RAMAN RAGHAV 2.0) is a crime film of a different sort. It's a wallow on the dark side that focuses on serial killer Ramanna (Nawazuddin Siddiqui) and the coke-addicted, misogynistic cop Raghavan (Vicky Kaushal) pursuing him. The solitary Ramanna sees his soulmate in the corrupt policeman, a man cloaked in the respectability of the law who, deep down inside, may be just as evil as his quarry. Maybe even moreso. Comparisons to Abel Ferrara's BAD LIEUTENANT and Jee-woon Kim's I SAW THE DEVIL are not unreasonable, but ultimately RAMAN is its own brutal beast.

The film is visually stunning and full of energy, propelled by a throbbing electronic dance music sountrack. It's also full of violence and disturbing imagery that are likely to be off-putting to some. If Quentin Tarrantino's films give you pause, you definitely want to steer clear of this one.

Even if you're made of sterner stuff, the film walks a delicate line between grounded and gritty and over-the-top insanity that can make it tough to swallow at times. What keeps it from flying completely off the rails is the casually horrific performance by Siddiqui.

In theory, Ramanna and Raghavan should be equals in the film, two sides of the same coin. But it's feels as if Kashyap was far more interested in Ramanna. Raghavan never comes across as the sort of anti-hero who can hold his own on screen, partly due to how the character is written, and partly because Kaushal isn't the same caliber of actor as Siddiqui.

It also doesn't help matters that Kashyap and his co-writer Vasan Bala don't seem to understand much about the world of drugs and addiction. I'd hazard a guess that everything they know about cocaine they learned from other movies. Raghavan's non-stop coke snorting and erratic behavior threatens to make Al Pacino's portrayal of Tony Montana in SCARFACE seem low key by comparison at times.

I wouldn't go so far as to describe the relationship between Ramannan and Raghavan as homoerotic (or homophobic, given that these are both such awful characters). It's more along the lines of the Hannibal Lecter/Will Graham relationship as depicted on the Hannibal TV series. Only in the case of Hannibal, both characters had both good and bad qualities. Here, both characters are just bad.

Given that the two main characters are both reprehensible in their own way. So it's falls to Sobhita Dhulipala as Raghavan's girlfriend, Simmy, to give the audience someone they can care about. She's good, but ultimately her character is too inconsequential to fully invest in. We also never get any sense of why this character, who the movie at times tries to present as a strong, independent woman, would be with Raghavan despite his complete lack of redeeming qualities.

Despite its flaws, PSYCHO RAMAN remains a stylish and engrossing film imbued with a dark philosophy that deep down, everyone is a killer. Some just do a better job of keeping their impulses restrained, or channeling them into more socially acceptable outlets like war or being a police officer. Not exactly uplifting stuff, but it's not trying to be. Definitely not a movie for everyone, but for those who like to take a cinematic walk on the dark side now and again, it's worth checking out. 2 ½ out of 4 stars.

** Thanks to film critic and facebook friend Murtaza Ali Khan for providing me with some context as to how this film fits into the overall Indian film scene. You can read his own review of PSYCHO RAMAN on the Huffington Post here.
Posted by Bob Ignizio at 12:00 AM