[MY ENTIRE HIGH SCHOOL SINKING INTO THE SEA is now playing in Cleveland at the Cedar Lee Theatre and in Akron at the Nightlight Cinema.] 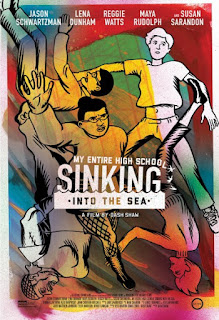 Watching movies used to be simpler before I started reviewing them. A movie was "good" if I liked it, and "bad" if I didn't. Now, I'm more aware that sometimes, quite frankly, I enjoy watching trash. And sometimes, a movie may be exceptional, but it just doesn't appeal to me. And being aware of these possibilities, I try to take them into consideration when writing my reviews.

I mention this because, although I was personally kind of lukewarm on MY ENTIRE HIGH SCHOOL SINKING INTO THE SEA, I recognize its originality and overall quality, even if its sensibilities are too aggressively indie for my tastes, its art and animation style too primitive and brutalist.

The film is written and directed by comics writer/artist Dash Shaw, and the often static, hand-drawn animation feels as if it might be more at home on the pages of a graphic novel than on a screen.

The main characters are a trio of sophomores who work for the school paper – writers Dash (Jason Schwartzman) and Assaf (Reggie Watts), and their editor, Verti (Maya Rudolph). Dash and Assaf are best friends, but a budding romance between Assaf and Verti doesn't sit well with Dash. To vent his frustrations, Dash writes a mean-spirited article about Assaf that lands him in detention with popular girl Mary (Lena Dunhan).

While serving his sentence, Dash stumbles across evidence that the school's principal Grimm (Thomas Jay Ryan) has forged documents making it appear that a new addition to the school is safe enough to withstand an earthquake. It is not, as the entire school discovers when one hits, and the film lives up to its title. Relying on their wits, and with the help of Lunch Lady Lorraine (Susan Sarandon), our intrepid heroes do their best to survive the disaster and "graduate" to safety.

Obviously the whole thing is an exaggerated metaphor for how shitty and clique-ish high school can be, and how sometimes overcoming those cliques is the only way to survive. Whether it works for one or not largely depends on the viewer's taste for absurd metaphor. It didn't entirely work for me, but I've no doubt that MY ENTIRE HIGH SCHOOL SINKING INTO THE SEA will strike a chord with many viewers, and most likely go on to become a beloved cult film. My personal rating would be about a 2 ½ out of 4 stars. But stepping outside my tastes to assess the film on its own terms? 3 out of 4 stars.
Posted by Bob Ignizio at 12:23 AM