[Press release from The Nightlight Cinema.] 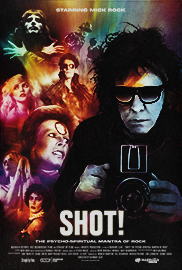 SHOT! The Psycho-Spiritual Mantra of Rock, the Mick Rock Documentary, is an odyssey into the colorful and crazy recesses of rock ‘n’ roll’s history. Join Film Critic Shawn Levy for an advanced, pre-release screening on 4/10.


A reckless joyride that delves deep into the mind of rock’s greatest living photographer: Mick Rock. Told through the distorted lens of rock ‘n’ roll mythology, icon-maker, psychedelic explorer, shambolic poet and custodian of dreams, Mick Rock navigates his story from the glam rock shimmer of London to the snarl of NYC punk, and deep into the new millennium.

Awaiting heart surgery after after a series of heart attacks, Mick turns inward to face himself – his past, the present and the future that will be born from the ashes of his resurrection. He stretched his nervous system to the limit to bring us the iconic images of the likes of David Bowie, Syd Barrett, Blondie, Queen, Lou Reed and Iggy Pop. He shot them all and imprinted them on our collective psyche forever. “I’m still in awe of the power of the camera and its magical reflections. In many ways I love it more than ever.” This is The Mick Rock story.
Posted by Bob Ignizio at 12:00 AM