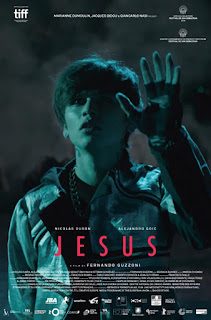 Much like the aimless New York teens of Larry Clark's KIDS, the youngsters in the Chilean film JESUS spend their free time drinking, drugging, fucking, and searching for the next cheap thrill -- which in this film includes watching videos of terrorist beheadings and starting a boy band.

Jesus (Nicolas Duran) spends his time with his fellow popstar wannabes roaming around causing stoned urban mischief that never really amounts to much, until one night, the group begins to harass a drunk man they find in the park. For reasons never really explained, things turn dark, and the group beats the man into a bloody mess.

As the victim's condition worsens and the media picks up the story, calling it a homophobic attack on a gay teen, Jesus and his accomplices have to figure out how to cover their asses.

As a character study, JESUS has a real problem in that it's all about a guy that we don't particularly like. Duran gives a great naturalistic performance, but the writing is too thin. We don't know much about Jesus other than his jackass antics, and the only sympathetic trait he may arguably have is that his father is kind of a dick.

The script doesn't even bother exploring the strange dynamic between Jesus's sexuality -- he hooks up with men and women -- and the supposed homophobia behind the "gay bashing." Refreshing that his sexuality is a non-issue, I suppose - but then why even include these details? Why did the victim have to be gay, if there was no dramatic justification?

At times the character development here seems jarring, with motivations and actions coming out of left field, but this may just illustrate how unmoored these characters really are. However, with unlikable characters continually making unsympathetic choices, there isn't really a single person that we can root for. It was a trap that Clark avoided by providing the Chloe Sevigny character in KIDS. Here, no one seems to have any noble causes.

All of this delinquency is beautifully shot by cinematographer Barbara Alvarez, largely at night, often in shadow, and frequently handheld, providing a murky color pallette accented with city lights and a lurking camera.

Director Fernando Guzzoni makes some unconventional choices for how to capture a scene, often maintaining quite a distance from his subjects and letting silence take up space. His use of shallow focus, centering on a mundane object close to the camera while letting the action play out in the hazy background, pays off cleverly. While most of these choices are successful, some particularly long or random shots seem to make the relatively short film drag at times.

With the title and a pseudo-baptism scene, Guzzoni seems to be making allusions to Christianity and perhaps the themes of betrayal, or to the "father giving his only son" ending. There also seem to be hints at today’s lost generation of preoccupied, entitled youth or the ways an older generation has failed them. On all counts though, there doesn't seem to be enough meat to really figure out what kind of stew they were trying to make.

It's okay that a film doesn't explain everything or wrap-up nicely with some profound message, but JESUS provides too little for the audience to decipher. Perhaps more detrimentally, Jesus himself provides too little as a character for us to really care. 2 and 1/2 out of 4 stars
Posted by Unknown at 12:00 AM