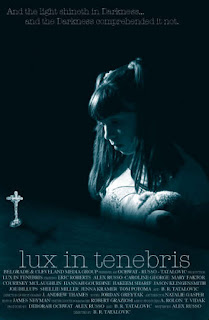 A local film production has its debut this week, and no,
it's not THE FATE OF THE FURIOUS.

Branislov Tatalovic, an instructor at the recently
instituted digital-filmmaking courses at Cuyahoga Community
College, premieres his feature LUX IN TENEBRIS at the Atlas
Cinemas Lakeshore multiplex in Euclid.

The drama (with a title translating as "light in darkness"),
was shot in the Cleveland-Akron area and in Belgrade with an
international, multicultural cast, including Oscar-nominated
thespian Eric Roberts. LUX IN TENEBRIS centers on two
sisters calling upon spiritual strength in trying to overcome childhood traumas and dark shadows in their past.The screening will be followed by Q&A with the filmmakers and an after-party.