Gigli (April 7th and 8th at the Cleveland Cinematheque) 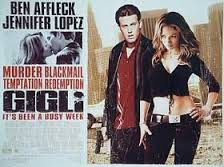 Feeling like a tedious actors' workshop exercise that got exposed to ego radiation and grew into the Unwatchable Hulk, GIGLI became infamous during the production phase for a high-profile love affair between stars Ben Affleck and Jennifer Lopez.

That was the good news...or the bad news, as the case may be. The movie ended up the worse news, as a big-budget flop during its 2003 release.

Affleck is the title character, a cocky LA guido with an oft-mispronounced name, freelancing as mob muscle even though he can't bring himself to hurt anybody beyond saying the F-word a lot (if you wonder why such a softie got to be a hard guy in the first place, then you're too clever for this flick).

Gigli's new job: kidnap and sequester a retarded young adult named Brian (Justin Bartha), who turns out to be the little brother of a crime-busting federal prosecutor. Since Gigli's underworld boss doesn't trust the thug to do the assignment right, a backup `contractor' shows up to help baby-sit the hostage dolt. Played by Jennifer Lopez, she's a shapely and provocative woman, going by `Ricki,' who throws all Gigli's neanderthal preconceptions and lustful instincts out of whack with the announcement that she's no ordinary scantily-clad, tough, intellectual, sexy, lady hit-man, she's a lesbian scantily-clad, tough, intellectual, sexy, lady hit-man.

That these two Beautiful People allegedly fell in love on camera while spouting these lines may provide voyeuristic interest, but if one is to be a third wheel during a Hollywood celeb couple’s courtship, couldn’t it have been any better than GIGLI?

Blame must be laid at the feet of writer-director Martin Brest, who did whip-smart work stuff with MIDNIGHT RUN and SCENT OF A WOMAN, but here seems inexplicably infatuated with the sound of his own overwritten dialogue and the Ben’n’Jen Show that gives vent to it during 124 painful minutes. The less said about the supporting walk-throughs by Christopher Walken, Lanie Kazan and Missy Crider the better, but late in the torpor Al Pacino shows up, and he does take ferocious command of the screen - and Brest’s verbiage - in a fashion that makes Lopez and Affleck look like two cringing kids in detention.

Even  if GIGLI were, somehow, more up to the quality of Pacino’s flashy bit, it would have to be faulted over the flimsy whimsy of the Brian character, a “Baywatch”-obsessed institutional case whose pathologies are a flagrant steal of Dustin Hoffman’s RAIN MAN tics with a side order of Tourettes and hip-hop lyrics. Reprised over the end credits, if you’re masochistic enough to stay around.

While the personal, not to mention professional relationships did not long survive the Hollywood train wreck, Lopez, Affleck, and Martin Brest have done, and hopefully will do, better than this. (1 1/4 stars)