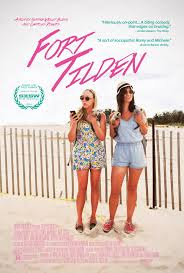 I enjoyed Martin Scorsese’s AFTER HOURS (1985), a comedy about a Manhattan yuppie trying to make a sex hookup in the boho districts of NYC and finding himself lost in a nightmare urban-hell landscape. But it didn’t knock me over so much as it did the other critics. Maybe because, being better-paid and more prestigious than I ever would be, they knew New York and grokked more of the jokes. Or perhaps Scorese’s idea of comedy seemed to be heavily rooted in pain and discomfort (even more so in his renown Jerry Lewis collaboration THE KING OF COMEDY, which you’re expecting to explode in bloodshed any moment).

But either I’ve gotten older and more bitter (highly likely) or the AFTER HOURS formula found an even better application in FORT TILDEN, a corrosive new farce in which the same sort of idea is applied to an demographic just as dislikable as 1980s yuppies: 2010s Millennials.

The wry comedy from tandem writer-directors Sarah-Violet Bliss and Charles Rogers is, yes, set in and around New York City, now (unlike Scorsese) in broad daylight. Our callow heroines in their 20s, both jobless, live well in in a roomy apartment thanks to handouts and wire transfers from unseen but very wealthy and indulgent, cosmopolitan parents.

Harper (Bridey Eliott) is an idle "artist," with nil to show for it, while roommate Allie (Clare McNulty) enlisted in the Peace Corps, only because it give her a reason to brag in an otherwise self-centered, rudderless existence.

The day before Allie is to undergo her orientation for Africa (a place about which she actually knows nothing) the pair feign sickness to dodge their responsibilities and head towards the title beach, evidently a hipster rendezvous-point, where sex-minded guys and copious supplies of the designer drug Ecstasy (here called by its new brand name, “mollies”) supposedly await them.

But the journey is sabotaged by crime, hostile ride-shares and fruitless interactions with young peers who seem not much better than they are. FORT TILDEN doesn’t miss a trick in the Gen-Y gallery of fecklessness and futility; the script even mention that Allie and Harper canvassed for votes for Barack Obama.

Indeed, there’s a refrain in the dialogue - in private insults that the leads usually direct against so-called friends – that 300 years from now, nobody at all will remember these clueless young people and the meaningless ways through which they frittered away their time.

It’s a tart epitaph for the current generation, and one can very well imagine the likes of Allie and Harper sleeping in after partying hard all night on November 7, 2016, and neglecting to vote in Hillary Clinton. At least a lot of those yuppies contributed to the computer revolution in one capacity or another.

Cult discovery is possible. Or am I just old and bitter? Not unlike Martin Scorsese himself, once labeled as a “movie brat” and punk kid of motion pictures, who, now old and gray, in 2016 announced that “cinema is gone.” I wonder if he’s seen this one. (3 ¼ out of 4 stars)