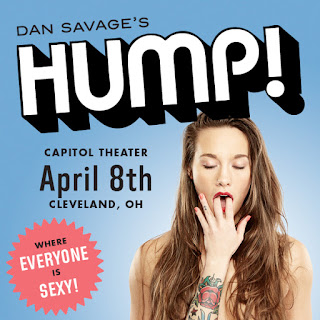 Overall I found this assortment less enjoyable than last years. Not that the films were worse from an artistic standpoint, but they just didn't grab me artistically. And there were a few that inspired the "running from the room in terror" comment above, most notably "Playing Scrabble". The short won in the "Best Kink" category for the fest, and it definitely goes well beyond anything you'd find in a 50 SHADES movie. Consider yourself warned.

"I'm Not Poly But My Boyfriends Are" reminds me of the kind of thing you used to see on HBO's "Real Sex", in which an older woman talks frankly about coming out of her shell sexually and slowly accepting that she wants multiple lovers in her life. It's actually kind of inspirational in a way.

There's plenty here for gay men, too, from the choreographed "The Forbidden Tango" to a vignette that plays like THE LITTLE MERMAID meets The Village People ("The Little Merman").

On the humor front, the stand-outs are "Savage Kingdom", a nature documentary about the elusive "gimp", and "It's Fucking Complicated", in which a couple delicately negotiate their various kinks and somehow manage to incorporate them all into one lovemaking session.

And hey, there are even some fairly straight forward hetero segments, including two ("Summer Fuckation" and "Fuck on the Mount") that involve considerable physical exertion in the great outdoors before the participants even get down to business. In the words of Danny Glover, "I'm too old for this shit." But it is nice to look at.