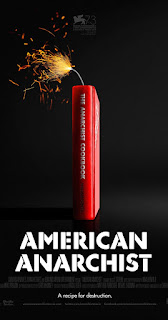 A portrait in ambivalence and regret, AMERICAN ANARCHIST tells the story of William Powell, author of the infamous tome 'The Anarchist's Cookbook'. Powell wrote the book in 1969 at the age of 19. It includes instructions for such fun do-it-yourself projects as making a bomb and crafting a silencer.

At the time he wrote the book, Powell believed that violence was a reasonable response to the socio political climate of the late sixties. Now in his mid-sixties and working with children who have learning difficulties, Powell's views have changed considerably. But the legacy of the book he authored all those years ago continues to follow him.

On the one hand, as Powell points out, you can't really hold him responsible for what people do with the information in the book. On the other hand, it clearly bothers him that his work has provided a blueprint for terrorists and murderers.

Director Charlie Siskel (FINDING VIVEN MAIER) does his best to understand Powell's motivations for writing the book, his evolving relationship with it, and his sometimes willful ignorance of its impact. There are a few old photographs and film clips of the sort we'd expect from a documentary of this sort, but the vast majority of AMERICAN ANARCHIST is a one-on-one conversation between Powell and the filmmaker, with Powell's wife offering an occasional comment or insight of her own.

Siskel isn't out for blood, but neither does he let his subject slide when venturing into morally questionable territory.  The result it a fair but unflinching look at how the things we do when we're young can continue to effect the world in ways we never imagined. It's also a look at how an angry young man can turn into a more thoughtful and caring person with age and wisdom. 3 ½ out of 4 stars.
Posted by Bob Ignizio at 12:00 AM