[A MORE CIVIL WAR screens Thursday April 6th at 6:00 pm at the Capitol Theatre and Saturday April 8th at 6:40 pm at Tower City Cinemas as part of the 41st Cleveland International Film Festival.] 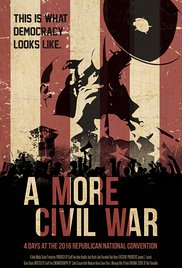 It was less than a year ago that the Republican National Convention was here in Cleveland. At the time, many still thought that Donald Trump was a joke, and the Republican party had doomed themselves to losing the White House by making him their nominee. Some people were so giddy they even entertained notions that a huge wave of anti-Trump sentiment would propel the Democrats into control of the Senate. Yeah, not so much.

At the time, there were very real fears that the RNC would break out into violence and chaos. Remember those, "Cleveland – it's gonna' be a riot!" T-shirts? It wasn't just the usual liberal protesters people were worried about. There was considerable infighting among Republicans, not all of whom were happy with the party's nominee, Donald Trump. The convention also took place in the context of multiple police shootings of unarmed black men as well as an attack on Dallas police officer. These wounds were fresh and raw at the time.

Thankfully, the worst fears proved unfounded. It was still one hell of a moment in history, though, both for the nation and for the city of Cleveland. And filmmaker Geoff Yaw and his crew were there to capture it, editing the resulting footage down to just under 2 hours.

All the greatest hits from both inside the convention and out are here. The historical attempt to unbind the delegates that failed on a voice vote. Melania's plagarized speech. The flag burning incident. "Lock her up!" Alex Jones crashing the Young Turks broadcast with Roger Stone and a Bill Clinton "Rape" t-shirt. That brief moment when Ted Cruz grew a spine. And of course, Donald Trump saying on film (in the third person, of course), "Donald J. Trump is calling for a total and complete shutdown of Muslims entering the United States until our country's representatives can figure out what the Hell is going on." Gee, how did anyone ever get the idea he wanted to impose a Muslim ban?

Regular Clevelanders share their opinions, too. Among them the staff and customers at the Diamond Cut barbershop, from which we get this quote: "We're watching tens of millions of white folks supporting a man that most people with any type of common sense would consider a buffoon, but they want to put him in the White House. It makes you wonder where are we going with this. And to me, it looks dark."

Trump supporters talk as well, and they don't all come across as crazies and racists. Notably Ralph King makes a good representative for the kind of guy who saw Trump as a hand grenade to toss into a Washington that wasn't listening to regular working class people. For him, Trump is a necessary evil to make politicians pay attention.

The film combines in-the-moment footage with interviews and clips from other outlets. Nothing groundbreaking on a filmmaking front, but that's fine. If there's any real issue with A MORE CIVIL WAR, it's an inherent and unavoidable one: the trade-off between making and releasing a film so quickly after the subject it documents, versus waiting a few years and maybe doing some follow-up interviews to provide more historical context. There's an immediacy to going the "get it out while the moment is still fresh " route, but only time will tell if A MORE CIVIL WAR holds up as the definitive document of the 2016 RNC or not. For now, though, it's well worth seeing to take a look back at where we were not too many months ago, and ponder just how much has changed since then. 3 ½ out of 4 stars.
Posted by Bob Ignizio at 12:00 AM