Things to Come (March 9th and 10th at the Cleveland Cinematheque)


[THINGS TO COME screens Thursday March 9th at 8:40 pm and Friday March 10th at 7:30 pm at the Cleveland Cinematheque.] 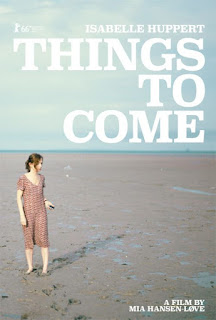 When philosophy teacher Nathalie (Isabelle Huppert) is gravely informed by her husband Heinz (André Marcon) that he has "met someone", her response is about as French as you can get. "Why tell me? Couldn't keep it a secret?" Heinz explains it's because he plans on moving in with this other "someone". "Are you sure," asks Nathalie, in a matter of fact tone?

Her husband's infidelity and abandonment isn't the only thing on Nathalie's plate. Some of the students at her school are on strike, she's dealing with demands from her publisher to re-edit and redesign her books to be more commercial, and her aging mother is constantly seeking attention. And yet somehow, Nathalie manages to handle it all, well, philosophically, even as the stress keeps piling on.

That doesn't mean she's emotionless, though. Nathalie just figures she has her intellectual pursuits to keep her content without a man in her life, and the strength to deal with the other problems. There's also the possibility of a rebound relationship with Fabien (Roman Kolinka), a former student turned tutor she has recently reconnected with. Shortly after Heinz drops his bomb, Fabien informs Nathalie he's decided to move to the country with his anarchist friends to make cheese and write. Could be just the change of scenery she needs.

Did I mention how French this movie is?

To be honest, it's hard to relate to THINGS TO COME at times. And Nathalie has so much dumped on her that the story, despite Mia Hansen-Løve's down to earth direction, can feel a bit contrived. Still, one can't deny the strength of Huppert's performance. She is one of the best actresses working today in any country, and as usual she doesn't play her role so much as inhabit it. That in itself is enough to make THINGS TO COME worth checking out. 3 out of 4 stars.
Posted by Bob Ignizio at 12:00 AM