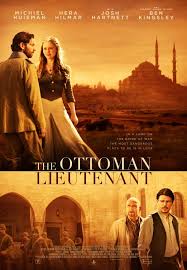 This review is going to get a little bit conceptual, so stick with me, okay? Okay.

There's a production company called The Asylum. You may know them from their inexplicably popular series of intentionally bad SHARKNADO films, and other equally silly creature features. Before they hit on that winning formula, though, the company specialized in "mockbusters". Essentially, low budget knock-offs of Hollywood films timed to hit video store shelves just as their mainstream counterparts showed up in theaters. Examples include TRANSMORPHERS, ALIEN VS. HUNTER, and THE DAVINCI TREASURE.

Now imagine, if you will, that someone decided to do a mockbuster version of THE ENGLISH PATIENT or some similar example of period costumed Oscar bait. Actually you don't have to imagine. You could just watch THE OTTOMAN LIEUTENANT. Although, to be honest, I don't recommend that course of action.

The plot of the film revolves around a plucky young nurse named Lillie (Hera Hilmar ). She's concerned with social justice but living in a world where a bleeding man is turned away from her hospital because of his skin color, and where she herself is valued only for her prospects as a wife and mother. Undaunted by the disapproval of her parents and society in general, Lillie sets off to do good in exotic Istanbul. There, she meets dashing Turkish military officer Ismaill (Michiel Huisman), who helps her navigate the culture. Despite their differences, the two fall in love against the backdrop of World War I. Ben Kingsley and Josh Hartnett turn up in supporting roles.

Now THE OTTOMAN LIEUTENANT isn't nearly as cheap or cheesy as the Asylum mockbusters I compared it with. It's obvious the budget wasn't huge, but technically the film is sound. And while the cast may not be "A" listers, the leads are all skilled thespians that most moviegoers will be familiar with. But that just isn't enough to compensate for a script this rote and generic.

Director Joseph Ruben is best known for thrillers such as THE STEPFATHER, SLEEPING WITH THE ENEMY, and THE GOOD SON. In movies like those, directorial style and knowing how to effectively build suspense can make up for a less than stellar script. That's not going to work in this sort of epic adventure romance, though. This is a plot and character driven film, and the plot and characters are too familiar and bland to warrant much interest.

The preceding criticisms aside, if you're burnt out by the endless stream of special effects heavy Hollywood spectaculars, you might still find THE OTTOMAN LIEUTENANT a refreshing change of pace. Cleveland's own Minister of Culture, Michael Heaton, did. And while my experience with the film was far less enthusiastic than his, I really can't argue with anything he writes in his more positive review of thefilm. Personally, though, I'd rather watch TRANSMORPHERS. 2 out of 4 stars.
Posted by Bob Ignizio at 2:05 PM