The Lure (March 23rd and 26th at the Cleveland Cinematheque) 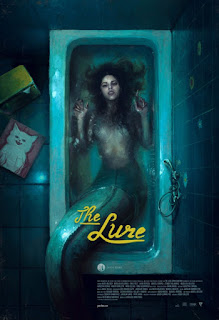 Take some of the darker elements of Hans Christian Andersen's "The Little Mermaid" and set the story in a smoky, Soviet era discotheque, and you might get some idea of what you can expect in the THE LURE.

As a Polish horror-comedy-romance-musical with plenty of gore and nudity, director Agnieszka Smoczyńska's film is one slippery fish. (Yeah, I said it.) Defying traditional classification, the story of two human-eating mermaids being taken in by a family of strip club performers is told with a suprising amount of sentiment and character development.

Kinga Preis gives a particularly compelling performance as the beautiful, but hard-living mother figure to the band of mucisians who take two mermaids, Silver and Golden (Marta Mazurek and Michalina Olszanska), under their wings to feature them in their bawdy musical acts. Preis is equally watchable whether she's performing on stage or in the danker moments of her character's everyday life.

One of the bigger obstacles for some, especially those looking for the horror experience, may be the musical numbers - not a standard trope for the genre. Admittedly, some of the lyrics seem a bit flowery or innane compared to the dialogue (some idioms may have been lost in translation), but this style does create more poetic verbiage for the musical numbers. The music itself is all quite good, if not entirely memorable, and contributes greatly to the early-80s-tinged motif, spanning from disco to punk, with lyrics ranging from tongue-in-cheek to poignant.

Clever editing, swirling tracking shots, and the grimy, neon look create a hypnotic, heady quality to a film that's best appreciated by just letting the narrative and setting wash over you without the need for overexplanation.

Something not often complimented, the sound design in the film is complex, thrilling, and impeccable. Aside from the pitch perfect sound of the retro music, the film is given so much of it's tension, and the mermaids are granted so much of their watery ferociousness, through the smart use of unsettling aquatic sounds and guteral, reptilian growls. The merfolk are even given their own telepathic language, designed by layering and synthesizing animalic sounds (dolphins, whales, lions) into a powerful spectrum of noises more grotesque and threatening than any real creature.

Matching the level of the sound effects, the creature design for the mermaids is believable and uniquely eely. Marcin Charlicki's visual effects sell the transformation sequences and create the desired effect in the final look of the mythical creatures. They are simultaneously gross and alluring, realistic and exotic.

One could argue that the film steps on its own bittersweet ending by having a particular character seek bloody vegeance immediately after a touching climax, but it makes complete sense for that character to do so. Ultimately, this final action also allows the story to close on a more horror-appropriate note.

With all of its technical cylinders firing at peak performance, THE LURE is a trippy, odd, creepy, and touching beast with enough talent to support its ambitious approach and enough hypnotic appeal to find its niche audience. 3 1/2 out of 4 stars