[THE HUNTING GROUND screens Thursday March 16th at 7:00 pm at the Nightlight Cinema in Akron.] 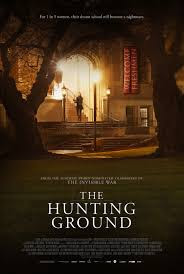 Call it urgent victim-culture programming for Women’s History Month, or call it (as I would prefer) a warning to anyone seriously thinking of sinking a fortune into a college education, when diplomas are largely worthless in today’s no-jobs economy. But Kirby Dick’s incendiary feature THE HUNTING GROUND will stick with you, and prove that feminism and sexism are no match for the biggest “ism” of all – tuitionism.

The documentary is a blistering expose about how "sexual violence has always been part of the college experience," as one interviewee puts it.

But in Great Recession America, the filmmakers charge, universities are so greed-driven and desperate as to resist expelling known sex predators - especially if the violators are student athletes crucial to sports success/largesse, and brothers in powerful fraternities.

Rape victims, meanwhile (including male ones), find themselves facing unsympathetic campus law enforcement and open hostility from peers (particularly when a BMOC football hero is accused).

I am given to understand that THE HUNTING GROUND actually follows up a previous nonfiction film by Amy Ziering (serving as producer here) entitled THE INVISIBLE WAR, about sexual harassment in the now-co-ed military. I haven’t seen THE INVISIBLE WAR, but those inclined to condemn it as a bunch of liberal FAKE NEWS to defame America’s fighting/groping men can at least take heart here that Kirby Dick and Amy Ziering really play no political favorites in THE HUNTING GROUND. The pathology of sanctioned date-rape and student women seen as disposable pieces of meat by money-grubbing administration extends even to bastions of liberal-feminism such as Harvard and that Mecca for righteous-leftie intolerance and anti-Trump sentiment, UC-Berkeley (whose faculty refused interviews).

Director Dick names names in breathtaking fashion at Florida State, UNC-Chapel Hill and Notre Dame, and if there is any flagrantly false note here, it is the stated hope that this situation will change anytime soon. One doubts it.

Amazing bad-timing fact: just as THE HUNTING GROUND was making its initial 2014 run in art-houses and festivals, the Rolling Stone magazine found itself having to retract a story about on-campus rape at the University of Virginia, in which the principle victim turned out to be lying (Amazing coincidence-fact: that’s also the plot of one of local mystery writer Les Roberts’ thrillers, relocated to a facsimile of Oberlin College).

So depending on one’s bias and blinders, you can either disregard the fear and allegations here, or wonder why any parent of a daughter (maybe even a son) would consider the open-season environment of American colleges to be a worthwhile investment. Except maybe in criminal studies. (3 ½ out of 4 stars)