The Devil's Candy (opens March 24th at the Capitol Theatre)


[THE DEVIL'S CANDY opens in Cleveland on Friday March 24th exclusively at the Capitol Theatre.] 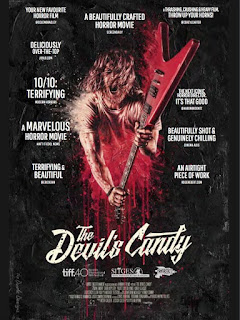 There are plenty of minority groups who have suffered worse indignities at the hands of Hollywood than metalheads. Nonetheless, it's fair to say that most cinematic depictions of headbangers have tended towards the stereotypical. To be specific, they have generally been portrayed as good natured but dumb longhairs whose only ambition in life is to party. Bill and Ted. Wayne and Garth. Beavis and Butthead. You get the idea.

So it's kind of refreshing to see Jesse (Ethan Embry), the metal-loving main character in THE DEVIL'S CANDY, shown in a decidedly more nuanced light. He's a loving father and husband who works as an artist. And while he may have tattoos and long hair and listen to Slayer and Metallica, he's not a moron or a space case.

Jesse and his family – wife Astrid (Shiri Appleby) and daughter Zooey (Kiara Glasco) – are thrilled when they luck into a spacious Texas home for a bargain price. It even has a barn that Jesse can use for a studio. This being a horror movie, though, the reason the place is such a great deal is because the previous owners were murdered there.

The killer, as it turns out, was their mentally ill son Ray (Pruitt Taylor Vince). And Ray, who is still at large, wants to come back home to play his guitar loud. He might also want to kidnap and bury a few victims, too.

Ray's compulsions may not be entirely due to mental illness, though. It seems there's some sort of supernatural force at work. The same force may also be affecting Jesse, leading his art in darker directions. Or maybe, the force that is driving Jesse is trying to tell him something, to get him to act before it's too late.

From a plot standpoint, there's frankly not a lot here that's groundbreaking. What makes THE DEVIL'S CANDY stand out are the well written characters (at least in the case of Jesse and his daughter; Astrid is more or less your standard issue "wife of the main character", while Ray is your usual movie crazy guy), and strong direction from Sean Byrne. Those aspects help hold the film together even when the fiery denouement starts to test the watcher's suspension of disbelief. 3 out of 4 stars.
Posted by Bob Ignizio at 1:15 AM