[THE BRAND NEW TESTAMENT screens Friday March 3rd at 9:00 pm and Sunday March 5th at 4:00 pm at the Cleveland Cinematheque.] 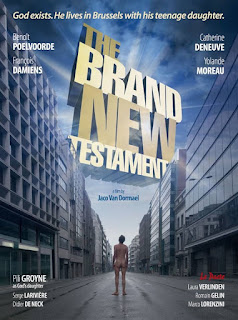 Directed and co-written by Jaco Van Dormael, THE BRAND NEW TESTAMENT wastes no time announcing its sacrilegious intentions. It begins with God's 10-year-old daughter, Ea (Pili Groyne), informing us via narration that once she added her 6 apostles to her brother's 12, the world became a better place. "God exists," she explains. "He lives in Brussels. He's a bastard, he's horrible to his wife and daughter." So yeah, it's safe to say some viewers will be offended.

The plot is set in motion when Ea runs away from home after being tipped to a secret escape route by her brother JC. Before leaving home, though, Ea decided to throw a serious monkey wrench into dad's creation by texting everyone the exact amount of time they have left to live. As you can imagine, this has major ramifications.

God, played by Benoît Poelvoorde as the Belgian equivalent of some beer-swilling, tank top-wearing trailer park denizen you might see on 'Cops', is furious. So he follows Ea to earth, leaving Mrs. God (Yolande Moreau) behind to contemplate her baseball card collection.

Ea begins assembling her followers, starting with a homeless guy (Marco Lorenzini) she enlists as her official scribe. As for the disciples proper, they consist of a beautiful, lonely one-armed woman (Laura Verlinden), an older guy who once dreamed of being an explorer but wound up an office drone instead (Didier De Neck), a pervy guy who decides to spend his remaining days on earth at nudie booths (Serge Lariviere), a man with homicidal tendencies who figures he can finally give in to them because he won't be able to kill anyone who isn't supposed to die, anyway (Francois Damiens), a woman who leaves her husband for a gorilla (Catherine Deneuve, her talents kind of wasted here in a small part), and a young boy who decides he wants to spend his last few weeks as a girl (Romain Gelin).

And yet, despite its edgy premise, in many ways TESTAMENT isn't all that far off from such examples of treacly Hollywood magical realism as BRUCE ALMIGHTY or BIG FISH. Sure, it heaps considerable scorn on patriarchal religions, and if that bothers you, you might want to steer clear. But when it comes to humanity, the film takes a mostly sunny view. Ultimately, the central theme seems to be that we'd all be ok if we just got a little more in touch with the feminine side of the divine. Controversial in our modern western society, perhaps, but the way the movie handles it is hardly biting.

Still, there are some laughs to be had, Groyne makes for a likeable lead, and Moreau is enjoyably grumpy as the misanthropic deity.  The film seems to think it's making a bolder statement than it really is, and it's probably a bit too long, but overall, it's good blasphemous fun. 3 out of 4 stars.
Posted by Bob Ignizio at 12:00 AM