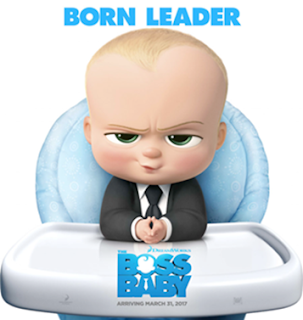 It wasn't that long ago that our youth were given an update on the old "storks bring babies" concept in the aptly titled (and not especially good) animated feature STORKS. Now THE BOSS BABY confuses kids with yet another goofy explanation for how human reproduction works. At least this time around, it results in a better movie.

The concept is that babies are produced on an assembly line. Most will be born into a family (in the normal biological way, one assumes, although that's never discussed). A few, however, show management potential. They are taken off the assembly line and whisked off to work in baby central.

One such baby is the "Boss Baby" voiced by Alec Baldwin. He has been given a special task: infiltrate the corporate offices of Puppyco to get intelligence about a new, super cute breed of puppy that threatens to steal a significant share of the love the babies believe is rightfully theirs.

This would all be kind of obnoxious and stupid if it weren't for the way it's framed.

Tim (Miles Christopher Bakshi) is a seven-year-old boy with a vivid imagination and a great home life with two loving parents (voices of Jimmy Kimmel and Lisa Kudrow). Tim's adult self (voice of Toby Maguire) is recounting how his little brother first came into his life, and it's reasonable to assume that he's being imaginative in his narrative, too. So in other words, just go with it. It's all just a metaphor for how kids can feel anxiety about going from being the only child to having a sibling.

Anyway, back to the plot. Tim is not thrilled when the Boss Baby comes into his life. Eventually, though, he learns his sibling's secret, and agrees to an uneasy alliance with the understanding that, if he helps Boss Baby get the intel he needs, then Tim will go back to being an only child. Various hijinks and shenanigans ensue.

There are ample fart, butt, and poop jokes, which always go over well with the kiddie crowd. But some of the jokes are a little more sophisticated and clearly targeted at the adults, like the references to Baldwin's role in GLENGARY GLENROSS ("Cookies are for closers," he tells one of his baby lackeys) or the way that his binky acts as a kind of hallucinogen.

Director Tom McGrath (the MADAGASCAR series, MEGAMIND) and his crew aren't in Pixar territory here, but they're still well above the majority of animated product cranked out for kids these days. My 6-year-old son loved it, and I was reasonably entertained. Considering some of the dreck I've endured for the sake of my boy, that's just fine. 2 ½ out of 4 stars.
Posted by Bob Ignizio at 11:26 AM