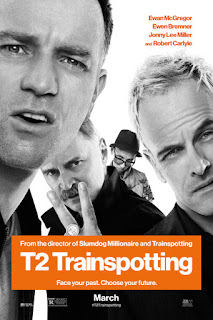 In 1996, Danny Boyle became a name brand director with his second feature, TRAINSPOTTING. It was a bold, energetic, edgy, fun, crazy piece of filmmaking that also put star Ewan MacGregor on the map. It's a near perfect film from beginning to end, and I doubt many viewers felt that it needed a sequel.

Aside from Boyle and Hodge, the film also reunites the cast of the original. And while it may not be "necessary", for anyone who enjoyed spending time with those seriously damaged yet somehow endearing characters, it's not a bad way to kill two hours.

T2 begins with Mark "Rent Boy" Renton (MacGregor), now living in Amsterdam, having a heart attack while on a treadmill. Evidently shaken, he heads back to his old stomping grounds in Scotland to catch up with his old friends.

Simon "Sick Boy" Williamson (Jonny Lee Miller), once Mark's best friend, is now running a con in which he blackmails respectable sorts with compromising videos of them engaging in sexual acts with his not-quite-girlfriend Veronika (Anjela Nedyalkova). Simon isn't doing heroin any more, having moved on to cocaine instead. Francis "Franco" Begby (Robret Carlyle) is still a violent psychopath, and as the movie begins he's just managed to escape from jail. And Daniel "Spud" Murphy (Ewen Bremner) is pretty much on the skids, having lost his girlfriend and son because he just can't manage to stay clean.

Simon is none too pleased to see his old friend at first, but then hits on an idea to pretend friendship so he can savor his revenge. When Begby finds out Mark is back, he's far less inclined to wait, but fortunately for Mark their paths don't cross. At least not right away. As for Spud, he's not caring about much of anything when Mark tracks him down.

There's sort of a plot, about Mark and Simon running a scam to get a government grant so they can finance a brothel that Veronika can run. Meanwhile, Begby tries to reconnect with his own family but can't stomach the fact that his son doesn't want to follow in his criminal footsteps, preferring a career in hotel management. As for Spud, he finally seems to find enough purpose in life to stay off the junk when he becomes the overseer of the foreman on Mark and Simon's renovation project. He also gains a little self esteem from Veronika's praise of his stories, and begins to write some of them down. And while it's ostensibly Mark and Simon who are the stars, for me it's Spud's story that was the most compelling.

Boyle's visual style and talent are still on display, if in a more mature and subdued form. And the cast have, if anything, just gotten better with age. Sure, T2 can feel kind of meandering at times, and the storyline involving Begby doesn't really satisfy, but overall it's a pleasure catching up with these characters. Sure, you could apply the criticism Simon makes of Mark to the movie as a whole: " It's just nostalgia! You're a tourist in your own youth." But looking back isn't always a bad thing, is it? 3 out of 4 stars.