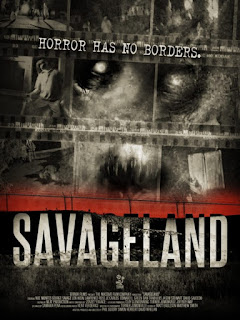 Sorry Marvel fans, SAVAGELAND isn't a surprise entry in the MCU bringing Kazar and Shanna the She Devil to cinematic life. Rather it is a horror film presented in faux documentary format about Francisco Salazar (Noe Montes), an illegal immigrant laborer and amateur photographer accused of committing a mass murder spree in a small Arizona border town. The evidence for his guilt is weak, but thanks to anti-immigrant prejudice and the desire to find a scapegoat, Salazar gets convicted. On his appeal, however, new and disturbing evidence seems to indicate that not only is he innocent, but the real culprits represent an unimaginable horror.

Not a bad premise, to be sure, and throwing a little social commentary about current attitudes towards illegal immigrants into the mix gives the film some added thematic weight. SAVAGELAND was conceived before Donald Trump's presidential run and talk of wall building, but there is a character clearly modeled after Sheriff Joe Arpao (Sheriff Parano, played by George Lionel Savage), and the general attitudes expressed by this character and others are in line with things Trump and his supporters have said and done with regards to immigration. Through this subtext, the film does a good job of conveying the dangers that a more aggressive policy towards illegal immigrants can have unintended negative consequences.

No BLAIR WITCH shaky cam or amateur-hour filmmaking here. The trio of writer/directors – Phil Guidry, Simon Herbert, and David Whelan – do a great job of making SAVAGELAND feel like a real documentary of the "talking heads" variety, trotting out the usual assortment of experts (including comic book writer and "Swamp Thing" co-creator Len Wein as a photographic expert) and interested parties to tell their stories and offer analysis of the case. For variety, there's a computer animated map showing the timeline of events, and a prison interview with Salazar. But most of the film's chills come from the very simple photographs allegedly taken by Salazar during the massacre.

SAVAGELAND isn't the kind of movie that tries to make audiences jump out of their seats every few minutes. And even though there are some bloody crime scene photos shown, it's not really trying to gross anyone out, either. Instead, this is a thoughtful, slow burn horror film that delivers a few genuinely creepy chills and a little food for thought. Eventually it leads up to a violent payoff that will likely satisfy some viewers, while leaving others wishing the film had ended a few minutes sooner when things were slightly more ambiguous.  3 out of 4 stars.
Posted by Bob Ignizio at 12:00 AM