Revolution: New Art for a New World (March 8th at the Cedar Lee Theatre. One show only!)


[REVOLUTION: NEW ART FOR A NEW WORLD screens in Cleveland on Wednesday March 8th at 7:30 pm exclusively at the Cedar Lee Theatre. One show only!] 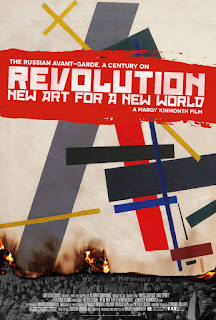 A bold new approach to art set against the backdrop of revolution and political intrigue. A documentary about the art movement that grew out of the Communist takeover of Russia would seem to have all the ingredients necessary to make a gripping film. Unfortunately, REVOLUTION: NEW ART FOR A NEW WORLD takes such a dry and scholarly approach to its subject that it's hard to imagine even aficionados of the movement being held rapt by what's on screen.

Which is a shame, because the art itself is vibrant, exciting, and, well, revolutionary.

In terms of presenting viewers with the pertinent information, REVOLUTION accomplishes its task. Where it comes up short is in presenting that information in a way that might interest a casual viewer. There is nothing cinematic about this work of cinema. Just the standard talking heads and film clips approach, and a fairly dull example of the form, at that.

It feels like something you might have been forced to watch in high school. Not that your average American high school would be adventurous enough to cover Russian avant garde art, but you get the idea.

If you're already interested in this particular art movement but haven't yet delved all that deeply into it, REVOLUTION is probably worth checking out. But truth be told, it would probably be more at home on the small screen than the big one. 2 ½ out of 4 stars.
Posted by Bob Ignizio at 3:03 PM