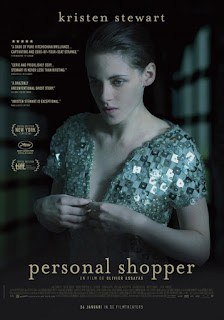 A meandering, slow-burn ghost story from director Olivier Assayas, PERSONAL SHOPPER touches on a number of genres without fully embracing any of them. It's not a horror film, but it does deliver chills. It's not a mystery film, but it does have its mysteries. It's not erotica, but there are some sexually charged moments tinged with the lure of the forbidden. Mostly, though, it's a well-crafted drama about a woman coming to terms with the death of her twin brother while seeking an answer to the age old question of whether there's anything beyond death.

Kristen Stewart plays Maureen, the personal shopper of the title. She works for a difficult celebrity who we never actually meet on camera, and in her spare time tries to contact the spirit of her brother Lewis.

Both siblings were mediums, able to sense presences, but Lewis had the greater skill. The two made a pact that whoever died first would contact the other from beyond the grave, if possible. As the film begins, however, it has been almost three months since Lewis passed away from a heart defect (shared by his sister), and Maureen has had no definitive contact.

But then, one night, she does make contact. With something. Whether or not it's her brother, however, is unclear, especially once Maureen starts getting strange and disturbing text messages.

Even as the film veers into thriller territory, it still takes time to stop and smell the roses, or perhaps more aptly, look at fashion and watch videos of various figures in the history of spiritualism. Such digressions might be annoying in other films, but they work well here.

Still arguably best known for playing Bella in the TWILIGHT series, since then Stewart has done her best to escape the shadow cast by those films. And she has come a long way, indeed, transforming herself into one of the best actors working today. For large stretches of the film, she is the only actor on screen, and she is never less than riveting.

When PERSONAL SHOPPER played at the Canne film festival, it was booed on its first showing. The second screening elicited a 4 and a half minute standing ovation. It's not hard to understand both reactions. In the end, it feels as if Marueen gets the answer she's looking for, but the audience is left with something a little more ambiguous. Whether you boo or cheer largely depends on how ok you are with that. 3 ½ out of 4 stars.