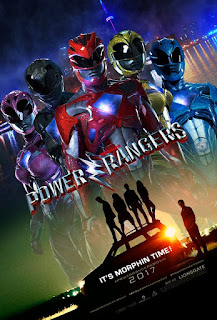 That's your first indication that this film is going to be a horrible misfire.

Angel Grove High's star football player Jason (Dacre Montgomery) is given extended detention and house arrest after stealing a rival school's mascot (the aforementioned bull). There he meets autistic genius Billy (RJ Cyler) and Kimberly (Naomi Scott), a cheerleader with anger issues. The final two rangers are Zack (Ludi Lin), a kid who skips school a lot and lives in a trailer with his sick mom, and "new girl" Trini (Becky G), who is wary of getting too close to anyone.

The way these characters come together, get their powers, and start training to be the heroes they are destined to be plays out like THE BREAKFAST CLUB meets CHRONICLE. And once the kids meet the holographic alien Zordon (Bryan Cranston) and his robot assistant Alpha 5 (Bill Hader), as an added clichéd bonus we get the standard Hollywood hero training montage, as well.

As fans of the original show know, there's also an evil villainess named Rita Repulsa (Elizabeth Banks). Again pushing the boundaries of family friendliness, this incarnation of Rita commits a few brutal (PG-13 level) murders and exudes a creepy sort of sex appeal that was definitely not there in the TV show. Her half-baked supervillain plan involves collecting enough gold to make a giant monster who will then dig up a crystal that destroys the world or some such nonsense.

In theory, this familiar setup could still have made for a good, or at least passable, movie. But as they say, the Devil is in the details. And the details of POWER RANGERS script (credited to John Gatins, with another 4 writers given story credit) are decidedly dumb and slapdash. And not in the good, stupid, fun way of the original series, either. No, this is a "teen superheroes who ride around in giant dinosaur robots and fight monsters" story that wants to be edgy and serious at least half the time, and fails miserably at the task.

As mentioned, it takes roughly 90 minutes before fans get what they paid their hard earned cash to see. Taking a page out of SUPERMAN: THE MOVIE's playbook the film spends way too much time on the origin of these characters, and believe me, the kids here aren't half as interesting or likeable as Clark Kent.

When the hero vs. monster action does finally kick in, it's not much to write home about, either. Neither the cheap and cheesy fun of the TV series, nor the kind of epic special effects throwdown we've come to expect of Hollywood productions, what we get instead is some lackluster property destruction and clunky looking CGI monsters.

And let's not forget the product placement, either. Krispy Kreme donuts certainly got their ad dollar's worth.

In the end, probably the only noteworthy aspect of the film (and the one you're likely to hear the most about, given the current social and political climate) is the diversity of the characters. On one level, being the "liberal snowflake" I am, I think it's great for teens to see a multiracial team of heroes, including one with autism and another who is gay. But good intentions do not necessarily equal a good movie, and this most assuredly is not a good movie. Avoid this clunker. 1 out of 4 stars.