[MY LIFE AS A ZUCCHINI opens in Friday March 24th in Akron at The Nightlight Cinema.] 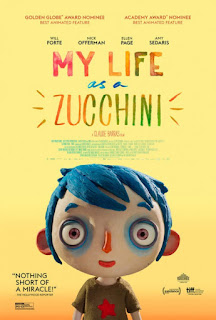 There's an unfortunate notion in America, perhaps not as prevalent as it used to be but still fairly widespread, that animated films are for kids. Certainly many are, and that's fine. But they need not always be, and in fact in other countries animation is frequently used to tell more adult stories. Just ask any fan of Japanese anime.

But Japan isn't the only country to make animated films with more mature subject matter.

MY LIFE AS A ZUCCHINI hails from France. It's not a kid's film, but not quite what most viewers would think of as an "adult" film (I mean that in the grown-up sense, not the X-rated one), either. The closest easy comparison for American audiences might be the "Young Adult" genre of literature. Something along the lines of a Judy Blume book for teens that deals frankly and honestly with subject matter some parents might find uncomfortable.

The film begins with 9 year-old Zucchini accidentally causing the death of his alcoholic mother. He's placed in an orphanage with other problem kids by a kind-hearted police officer who continues to check up on the boy. Contrary to what one expects from cinematic orphanages, this one is actually not too bad. The people who work there are nice, and the kids form a sort of surrogate family. Despite having some pretty heavy baggage to deal with, they're more or less content.

Problems arise, however, when it seems as if one of the orphans, a girl Zucchini likes named Camille, will be taken away to live with her cruel Aunt.

MY LIFE AS A ZUCCHINI utilizes a stop motion animation process similar to what the folks at Aardman (The Wallace and Grommet/CHICKEN RUN folks) use, only uglier and less whimsical. That fits the overall tone of the film, which is melancholy but peppered with humor. It deals with some pretty awful things issues that, sadly, affect the lives of some real kids. And yet, without minimizing how bad those things are, the movie never feels like a depressing wallow. If anything, it's kind of upbeat in the way it shows these damaged kids finding happiness in spite of everything.

I won't tell you if your kids should or shouldn't see this movie. I let my 6-year-old watch ALIEN, so I'm probably not the best judge on that kind of thing, anyway. I'll just say that the film is rated PG-13, and in my opinion that's a legitimate rating. There are some pretty heavy ideas being dealt with here; some kids may be ready for that, others may not. There is no nudity or violence, but as mentioned before, there is frank talk about sex, and about kids living in abusive situations.

What I can tell you is that this is an excellent film, and while I enjoyed ZOOTOPIA, which won this year's "Best Animated Feature", and really enjoyed KUBO AND THE TWO STRINGS, if there were any justice, MY LIFE AS A ZUCCHINI would have taken home the statue. 4 out of 4 stars.
Posted by Bob Ignizio at 11:26 AM