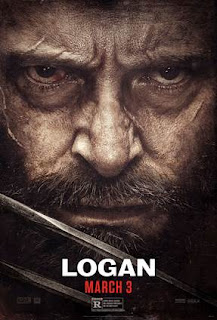 Although it exists within the X-men series of films dealing with a band of mutant superheroes, James Mangold's LOGAN is less a superhero film and more a serious, adult action film. The kind of movie Clint Eastwood or Charles Bronson might have starred in in the seventies. Sure, the title character has metal claws that pop out of his hands, as well as the ability to heal from almost any wound, but this is a much different, and much more grown-up beast than your average comic book fare.

The violence is part of that, to be sure. From its very first scene, LOGAN announces its intention to earn its 'R' rating as Hugh Jackman's hirsute hero slices and dices a group of car thieves unlucky enough to have picked his limousine as their target.

The film is set in the near future and Logan, once known as the Wolverine, is keeping a low profile. We're not sure exactly what happened, just that there was a terrible incident that resulted in the death of several X-Men and wounded hundreds of regular people. Apparently new mutants have stopped appearing, too.

Other than Logan, the only mutants we see are Professor Charles Xavier (Patrick Stewart), who is suffering from some sort of degenerative brain disease (probably Alzheimer's). While Logan does his driving job to keep the money coming in, Caliban (Stephen Merchant), an albino mutant with tracking powers, looks after the Professor. He not only tends to Charles' needs, he also makes sure he gets drugs to tamp down his mutant psychic powers.

The plan is for Logan to save up enough money to buy a boat. Not a particularly practical plan, but a plan nonetheless. One that gets tossed out the window when Logan is recruited to help a young girl named Laura (Dafne Keen) escape from a group of mechanically augmented bad guys known as The Reavers, led by Piecre (Boyd Holbrook).

Laura, it turns out, is a mutant. Not only that, she has claws and a healing factor just like Logan. You don't have to be a genius to guess there's some kind of connection. Anyway, once Laura comes into the picture, Logan and the Professor set off on a road trip to get her to safety, the bad guys in pursuit.

Not surprisingly, a number of well executed fight scenes ensue, and Mangold thankfully shoots them in a way that is exciting without being incomprehensible. Again, recalling the seventies when directors understood that if you were going to pay stunt people and special effects people to do a really bad ass fight scene, maybe you ought to shoot it in such a way that audiences can actually see what's going on.

But as this review mentioned early on, LOGAN is not a non-stop action film. Mangold also understands the concept of pacing, and sees value in spending time developing his characters. Old fashioned concepts in this age, perhaps, but there are still some who appreciate them.

This is Jackman's 8th time playing Logan/Wolverine (9th if you count his cameo in X-MEN: FIRST CLASS), and he wears the character like a finely tailored suit. There aren't a lot of new twists to the character, as even the surrogate father angle has been explored to some degree in his relationship with Rogue in the first X-MEN film. Nonetheless, fans will be happy with the portrayal, and the film offers a fitting swan song for what Jackman says is his last go-around.

Stewart gets to do a little more with his Professor X, showing a more vulnerable version of the character. One who has some very serious regrets, but has still managed to hold on to some small reserve of optimism and hope despite everything that's happened.

And Laura/X-23... well, she's pretty much a more feral version of Hit Girl. She doesn't talk a whole lot, but can more than hold her own in a fight. A little more depth to her character might have been nice, but given the film that this is, it's not a major issue.

What is kind of a major issue is one sequence near the middle of the movie. It's a fairly standard digression in a movie like this, the one in which the heroes on the run find themselves staying with some ordinary folk for a bit. Sorry, but given Logan's way of thinking, he would never have put these people in the kind of danger they get put in by his presence. And the way it plays out just didn't feel right to me. That's about all I can say without getting into spoilers, though.

Flaws aside, though, I enjoyed LOGAN a good deal. I almost never say things like, "this is a super hero movie for people who don't like super hero movies," but in this case, I would. Now you'd still need to be open to action movies, and ones with considerable violence, to boot, but I do think it's fair to say the audience for LOGAN would skew a little older and a little wider than that for, say, the average Marvel or DC film. 3 ½ out of 4 stars.
Posted by Bob Ignizio at 12:00 AM