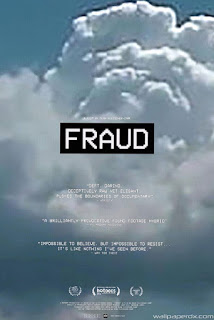 Just because the footage you're watching is real and unstaged, doesn't mean the way it's presented is "the truth". Exactly what one chooses to include and how one chooses to edit and combine various elements can turn even the most innocuous of home movies into something very different.

At least that's what happens in FRAUD. The film's direction is credited to Dean Fleischer-Camp's, but one could make a case that editor Jonathan Rippon and "star"/amateur videographer Gary deserve co-authorship credit. Fleischer-Camp may have chose what footage to use out of over a hundred hours Gary posted to youtubee, but it is Rippon who takes footage shot at different times, locations, and situations and blends it together into a believable narrative. And Gary, of course, shot the original home movies of his family, so the shot choices (like the many shots of his wife's derriere) are his. Or is it just that those are the shots Fleischer-Camp and Rippon decided to use? Maybe if one were to watch all the raw footage, it wouldn't seem nearly so excessive.

Whatever Gary's original intent, Fleishcher-Camp and Rippon have reshaped the footage, selecting scenes that emphasize the family's consumerism, and their issues with debt. This provides a good foundation for taking mundane home movies and turning them into a crime story. And it's a fairly convincing job, too. If you were to watch FRAUD with the notion that it was a genuinely factual documentary, you would likely believe that Gary and his family were involved in an illegal act.

This is very much a "found footage" film ala THE BLAIR WITCH PROJECT, right down to the often shaky and amateurish videography. The difference is, this footage really was found. And yet the way this real footage of real people has been manipulated serves to raise a number of important questions about film in the modern age, and how easily the camera can be made to lie.

Audiences who saw FRAUD at its premiere in the Hot Docs festival reacted strongly, as well they should. The film calls the very nature of what constitutes a documentary into question, and makes us face the realization that even at their most sincere, documentaries aren't necessarily the absolute truth we like to think they are, but are shaped to a greater or lesser degree by the people who make them. It is perhaps a bit too rough around the edges and conceptual to be truly entertaining, but as a thought provoking piece of cinema it succeeds. 3 ½ out of 4 stars.
Posted by Bob Ignizio at 12:00 AM