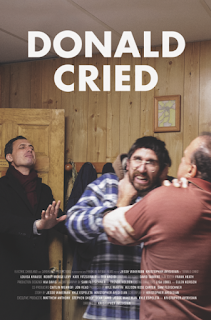 The manboy. The slacker. The lovable loser. Call him what you will, but he's become a staple of modern films. Usually portrayed as benign, and often depicted as possessing a kind of wisdom about life that those who give in to maturity and responsibility lack, you've seen these sort of characters in films like JEFF WHO LIVES AT HOME, OUR IDIOT BROTHER, PINEAPPLE EXPRESS, and many more. DONALD CRIED presents us with the creepier and more annoying flipside of the characters in those films.

But before we meet Donald, the manboy of the film's title, we meet Peter (Jesse Wakeman). Peter works in the finance business in the big city. When his grandmother passes away, he has to return home to pick up her belongings and her ashes, and set up the sale of her home. It should be a relatively quick and easy process, but the loss of his wallet and a car that won't start throw a wrench into things.

His work can't wire him any cash, so Peter is forced to seek help from his old neighborhood friend, Donald (Kris Avedisian, who also directed and co-wrote). The two used to be metalheads and social outcasts, a past that Peter wants to leave behind.

The two embark on a series of lightly comic, and occasionally dark, misadventures. Along the way, Peter is forced to revisit his past, something he isn't particularly fond of doing. Donald is portrayed as kind of an obnoxious jerk with no social filter who pushes himself on his old friend. But our sympathies don't lie entirely with Peter, who is clearly just using his old friend. What we learn about the shared past of these two "friends" further colors our attitudes.

Ultimately, we wind up with two characters who aren't especially likeable, but are interesting enough and real enough so as not to completely lose our sympathies. It's not as dark and lacks the overt homoerotic themes, but in many ways DONALD CRIED is reminiscent of CHUCK AND BUCK.

Like many of the films associated with the "mumblecore" movement, DONALD CRIED focuses on character and dialogue over plot. The performances and filmmaking are more polished than the norm for that loose subgenre, though. I'm frankly surprised Wakeman hasn't been in more stuff, and I suspect after this movie he should start getting more calls. It's harder to assess Avedisian's performance, as his part is more of a caricature, but as a director he shows real promise.

First and foremost, DONALD CRIED is a character study of two flawed human beings. One who never grew up, one who became an adult and followed the socially accepted path to success, neither of whom is really that happy. Beyond that, the movie seems to be saying that you can go home again, but maybe you don't want to. And even if we think we've managed to escape the worst parts of our past, it's always there, just beneath the surface, waiting to pop up and make us cringe. 3 out of 4 stars.