[COUNTER CLOCKWISE is no available on home video and VOD.] 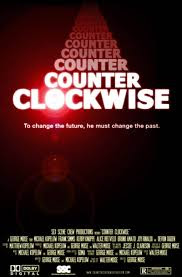 Filmmaker George Moise' agreeably low-budget time-travel yarn had me for while…then lost me…then had me…then lost me etc. I suppose on balance it’s pretty good, aspiring essentially to being a cause-effect teaser in the tradition of 12 MONKEYS and DONNIE DARKO (other stated inspirations were the BACK TO THE FUTURE trilogy and an indie I never saw, TIMECRIMES). I might even throw in there local writer James Renner’s novel The Man From Primrose Lane (even though that’s a bit of a spoiler).

These are not bad associates, at least when things stay fairly cerebral. Which is about more than half the time in COUNTER CLOCKWISE. Nebbishy inventor Ethan (Michael Kopelow) working in a private lab on platforms that, a la THE FLY, teleport living things (there’s a one-eyed dog he uses as a test animal), crosses the wrong wire and ends up with a time machine instead.

Experimenting on himself, he zaps himself into his lab a months into the future - to find the complex closed down, his beloved wife murdered, his mother institutionalized, and himself a notorious fugitive, object of a manhunt as a brutal mass-murderer.

Trying to use the time machine to unravel what went wrong, he uncovers corporate conspiracies and criss-crossing timelines that indicate that Ethan already did (or already will) take more trips back in time to correct his errors and try to sort things out.

Speaking of which…Home-video is probably an ideal format for this one, as it may take a few repeat viewings – and even a few DIY charts on scrap paper - to begin to understand the deliberately convoluted narrative. Also check out the making-of extras and commentaries on the Artsploitation DVD release, in which Moise describes not only the fraught creation of the picture (with reshoots and stop-start progress) but the auteur’s frustration with having to satisfy focus-groups and test audiences, who couldn’t comprehend what was going on. Well…duh, as we used to say in school.

Another thing on which those test auds were correct are the discordant ways the plot turns graphically violent, then positively sadistic, amidst eye-rolling, exaggerated performances, pretty much turned in by all but Kopelow. This kind of arch-Coen Brothers approach, with its darkly comedic elements, is said by Moise to arise from a most surprising influence: Woody Allen's BULLETS OVER BROADWAY.

Well, Moise is something of an original I think; not your run-of-the-mill 'Dr. Who' nerd. And in stretches the filmmaking team's raw enthusiasm shines through COUNTER CLOCKWISE, even as you’re scratching your head. Science-fiction audiences who appreciate a nice try, even when it doesn’t entirely work, with some very lateral thinking thrown in, are the best audience for COUNTER CLOCKWISE. And, as I say, my rating applies best if you take time for all the extras and deleted scenes and featurettes that strive to fill in the story blanks and iron out the chronological loops and Moebius strips. (2 3/4 out of 4 stars)