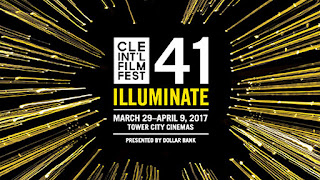 The 41st Cleveland International Film Festival, presented by Dollar Bank, is kicking-off its 12-day run with the click of a typewriter, and closing out with a look at legacy. CIFF41 will be held March 29 – April 9, 2017 at Tower City Cinemas and select neighborhood screening locations.


OPENING NIGHT
On Wednesday, March 29th the CIFF41 will open with CALIFORNIA TYPEWRITER. Directed by Doug Nichol, the film features a cast of artists, writers, and collectors who remain loyal to the typewriter as their preferred tool, and oftentimes their muse. The film also movingly documents the struggles of California Typewriter, one of the last standing repair shops in America dedicated to keeping the aging machines in working order. Featuring Tom Hanks, John Mayer, David McCullough, and Sam Shepard, among others, this film will leave you looking at your own relationship with technology.
Tickets to the Opening Night Gala are $200 per person ($175 for CIFF members). The evening includes the 7:00 p.m. screening of the film at Tower City Cinemas, followed by a reception at Post Office Plaza in Tower City Center. Scheduled special guests include director Doug Nichol and featured subjects Ken Alexander, Martin Howard, Jeremy Mayer, and Richard Polt.
CLOSING NIGHT
On Sunday, April 9th at 7:00 p.m. the Festival will close with THE HERO. Directed by CIFF39 alum Brett Haley (I’ll See You in My Dreams), the film is a moving, sharply observed character study starring the great Sam Elliott as Lee Hayden, a Western film icon whose best performances are behind him. Faced with a cancer diagnosis, Lee’s priorities are refocused, causing him to assess the life he has led. With a star-studded cast including Nick Offerman, Laura Prepon, and Krysten Ritter, THE HERO addresses the question most people face at one time or another in their lifetime: what kind of legacy will I leave?

Closing Night is sponsored by University Hospitals. All those in attendance at any of the films showing at Tower City Cinemas on Closing Night are invited to a dessert reception and awards presentation program on the Tower City Center Grand Staircase after the screenings. Tickets to any Closing Night film are $14 for CIFF members and $16 for non-members.
CIFF41
For more information on the 200 feature films and 215 short films that will be shown between Opening Night and Closing Night, visit www.clevelandfilm.org beginning Friday, March 3rd at 11:00 a.m. Program Guides will be available at all Dollar Bank branches, and throughout the area, the week of March 6th. Tickets go on sale to CIFF members on Friday, March 10th at 11:00 a.m. and to the general public on Friday, March 17th at 11:00 a.m. Tickets will be available on line (www.clevelandfilm.org), by phone (1.877.304.FILM), or in person at the Film Festival Box Office in the lobby of Tower City Cinemas.
Posted by Bob Ignizio at 12:00 AM