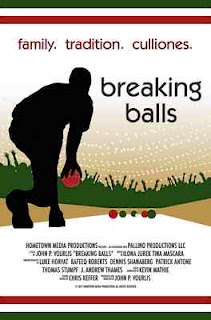 When Italians began to settle in Cleveland in the late 1800s, they brought with them the game of bocce. The game involves rolling a small target ball, called a "polino", and then having players roll other, larger balls trying to get as close to the target ball as possible. It is acceptable to knock your opponents balls with yours. The four closest balls each earn a point, and games are generally played to 13 points.

Me, I'd just describe it as bowling crossed with shuffleboard played in a sandbox.

Regardless, it is a popular game among those of Italian ancestry, and like just about any game, it has its championships and tournaments. Two of the biggest of these just happen to take place in northeast Ohio: The Cleveland Challenge Cup in Wickliffe, and another major tournament in Mayfield Heights.

The documentary BREAKING BALLS focuses mainly on the Cleveland Challenge Cup, and three individuals associated with it. Gino Latessa is a produce buyer who runs the tournament, Dominic Olivo is the groundskeeper at the Wickliffe Italian-American club who maintains the bocce courts, and Brian Polantz is a teacher who is also one of the top players in the sport. We meet others involved in the world of bocce, but the film wisely finds some structure by always eventually coming back to these three.

As a friend of mine recently opined, you can pretty much make an interesting documentary about anything. And director John Vourlis has done just that here, combining history, culture, the excitement of an athlete striving for greatness, and an emotional story of a man trying to pass on his skills and knowledge before he dies. Despite being Italian myself, I never gave bocce a thought, and yet I was still engrossed by the film. It also probably helps that Vourlis doesn't try to stretch things out, BREAKING BALLS clocking in at just 75 minutes.

This is your standard "talking heads" kind of doc. It's not pushing any boundaries, but that's not the point. Whether you're a bocce fan already, or just interested in learning about a part of Italian heritage you may not have heard about before, BREAKING BALLS is an enjoyable and informative film. What more do you need? 3 out of 4 stars.
Posted by Bob Ignizio at 12:00 AM