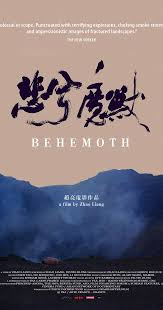 But then there was Chinese filmmaker Zhao Liang's documentary-expose BEHEMOTH. Better reviews than the Howard film, too. The French co-production pontificates – mostly in visuals, shot by Zhao himself - on the environmental/spiritual devastation wrought by China's rapid industrial progress.

Peasant laborers and miners who supposedly benefit from all this instead die from lung disorders, and the final act presents an ironic vision of Dante's "paradise" in terms of the gleaming, almost entirely empty "ghost cities" built in the Chinese hinterlands, high-rise boomtowns for the new civilian prosperity that never happened.

From time to time also a performance-artist type with a mirror wanders the landscapes, and digital special f/x are dropped in during the esoteric, subtitled poetry-narration. These are pretentious and distracting; more understandable are the juxtapositions of the stoic worker’s lined, worn faces, and the grieving families in soot-covered hovels when the men succumb to respiratory failure induced by inhaling coal dust.

Of course, “behemoth” is a ravenous monster in the Bible, comparable I suppose to King Kong (and not in a good way). Here the concept is reborn/Born Again, in the notion that behemoth is China’s outsized, all-devouring industrial progress, along with the illusory economic "miracle" it has brought the people. One that looks here like a pretty bad deal.

Though Shanghai billionaires and Trump appointees/supporters may look at the dead lands and the dying workers and wonder what all the fuss is about. Perhaps BEHEMOTH will be a bit more accessible when someone does a US remake after our environmental regulations get repealed. For once, the concept of an English-language do-over might have merit, alas. (3 out of 4 stars)