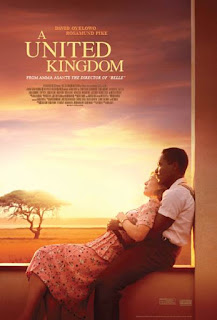 The British film director Amma Asante, a former child actress, has a special interest in issues of race in Great Britain. Her 2013 BELLE told the story of Dido Elizabeth Belle, the mixed-race daughter of a Royal Navy Admiral in 18th-century England. Her new film, A UNITED KINGDOM, tells another based-on-truth racial story, that of Seretse Khama, the Prince of Bechuanaland (now Botswana) who, while studying law at Oxford, fell in love with Ruth Williams, a white British office clerk.

Their marriage in 1948 caused conflict and disapproval from their families and the governments of Great Britain (which had colonial authority over Bechuanaland) and neighboring South Africa, which was implementing its terrible apartheid regime, and whose cooperation in the burgeoning Cold War was deemed essential to the British government. Seretse's refusal to divorce Ruth caused a rift between Seretse’s uncle, acting regent of the powerful Bamangwato tribe (a placeholder for the young king while he completed his education) and resulted in the couple being exiled for life from Bechuanaland.

David Oyelowo plays Seretse with the same serious dignity he brought to Martin Luther King in SELMA. At a Missionary Society dance, Seretse is captivated by the spirited Ruth (the lovely Rosamund Pike), who shares with him a taste for authentic jazz (“I have never trusted an Englishman to play it,” she observes).

An adventurous young woman left high school to drive an ambulance as part of the Women's Auxiliary Air Force, Ruth is immediately taken with Seretse and has no misgivings about dating an African man. Society and family have other ideas: the couple are harassed and assaulted on the street by racist thugs, and Ruth's father (Nicholas Lyndhurst), disowns her in disgust. Her sister, Muriel (Laura Carmichael), however, remains loyal throughout. In real life, the couple courted for a year, but the film compresses events to make it look like a whirlwind affair; no sooner have the couple had their first dance than they are madly in love. Sometimes it happens that way; they are an attractive and joyful pair, even if their personalities aren't as well developed by the script as you'd hope. Asante and screenwriter Guy Hibbert, working from Susan Williams' book Colour Bar, seem more focused on telling the story than on fleshing out the characters.

Ruth also has no reluctance to uproot from England and go to live in Bechuanaland, where Seretse plans to return with his new wife as tribal queen. His sternly disapproving uncle, Tshekedi Khama (Vusi Kunene), schemes, thorough the British high commissioner and Colonial Office, to prevent his nephew from becoming king. The well-meaning Ruth meets cold resistance from Seretse's sister and aunt and perplexity from the tribespeople. At a tribal general council, called a kgotla, Tshekedi and Seretse, vying for the crown, both speak. Thousands of tribespeople rise, shouting “pula!” (rain) in support of Seretse.

The government of neighboring South Africa condemns the “miscegenation.” The British Labour government secretary of state for Commonwealth relations invites Seretse to London to discuss the tribe's leadership. The real functionary was Philip Noel-Baker; the film creates a character named Sir Alistair Canning (Jack Davenport) as the reptilian face of government expediency and corruption. The film is particularly pointed in its depiction of the condescending colonialist functionaries and their wives (one of whom, Lady Canning, is played by Jessica Oyelowo, David's wife).

While Seretse is in London, having left his pregnant wife in Bechuanaland, he is asked to relinquish all claims to the chieftainship. When he refuses, he is banished from his homeland for five years. When the Conservative Party is elected in 1951, it extends the banishment for life, despite its leader Winston Churchill's campaign promise to restore Seretse's birthright. With help from an investigative reporter, Seretse discovers that much of Britain's interest in the case is related to its valuable, recently discovered mineral resources, one of several revelations that help him in his fight to return.

The story of how Seretse and Ruth overcame prejudice and adversity and won the hearts of their people and, eventually, the independence of their nation, is told with sincerity and passion, even if the story is schematic in places. Strong acting, period-evocative production design by Simon Bowles, and Sam McCurdy's luminous cinematography, rendering moonlit late-40s London streets as beautifully as the amber-hued African plains, contribute to the success of this very traditional, but high-quality film. 3 1/2 out of 4 stars.
Posted by Pamela Zoslov at 12:00 AM