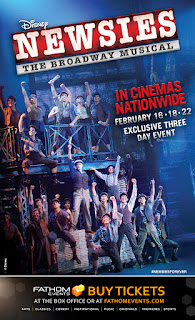 You can enjoy the Tony Award®-winning musical NEWSIES by entering for the chance to win Cinemark at Macedonia tickets! These are valid February 18 or 22 – http://tinyurl.com/zb2ofhw

Filmed live on stage at the Pantages Theatre in Hollywood, CA, this not-to-be-missed high energy show stars Original Broadway cast members Jeremy Jordan as “Jack Kelly,” Kara Lindsay as “Katherine,” Ben Fankhauser as “Davey” and Andrew Keenan-Bolger as “Crutchie”. They’re joined by North American Tour stars Steve Blanchard as “Joseph Pulitzer,” and Aisha de Haas as “Medda Larkin,” and Ethan Steiner as “Les” along with members of both the Broadway and North American Tour ensembles, filling the stage with more “newsies” and more dancing than ever before. #NewsiesForever

Additional tickets can be purchased by visiting: http://www.fathomevents.com/event/disneys-newsies-the-broadway-musical/buy.
Posted by Bob Ignizio at 5:18 PM