Generally abrasive but mercifully short, VOODOO is on-par with the usual straight-to-Redbox fare -- which is to say it's not really worth the watch, even if you catch it on cable for free. 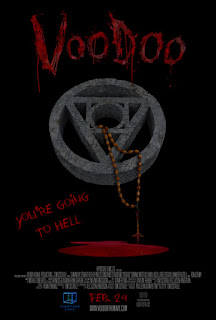 The scant plot largely rests on the performance of Samantha Stewart who plays cursed heroine Dani Lamb. (Get it? She's the "lamb" being lead to slaughter. **eye roll**) Dani made the mistake of getting involved with a man whose wife is apparently a voodoo priestess. The betrayed spouse conjures bad juju against Dani, and it follows her all the way to L.A. where she is visiting her cousin.

The first half of this found footage movie feels like watching someone else's boring vacation video, populated by folks you have no interest in spending time with -- much like traveling with people who get on your nerves.

In a particularly awkward scene, Ron Jeremy even makes a cameo to party with them, because... well, what the hell else is Ron Jeremy doing?

Once Dani finds herself in "Voodoo hell" or whatever, the second portion appears to have been shot inside a cheesy haunted attraction, complete with its overacting troupe of amateur performers, low-end make-up, and Halloween store props.

It's all as unpleasant as is sounds, and not half as interesting as I'm describing, coming off as kind of desperate and pretty silly.

Stewart appears game for whatever ridiculousness Constabile throws her way, but her screen presence is so shrill and lacking in depth that the audience never gets invested in her journey. Her "N'awlins" accent is cartoonish at best and sloppily inconsistent at worst. At a basic level, her choice (or perhaps the director's choice) to play her as some wide-eyed country bumpkin fascinated by everything in the big city doesn't exactly play as believable, especially in light of her assertions that she loves to attend the debauched Halloween celebration in her native New Orleans and has dealt with being "the other woman." She plays Dani as some small town, podunk rube, and the naivete doesn't ring true with her backstory.

Worst of all, Dani is not someone the audience enjoys spending time with even at her best, and as shit starts to hit the fan for her, she overacts with dim-witted sobbing or obtuse screams that range from pitifully whiny to totally aggravating.

The movie suffers greatly from the Achille's heel of most found footage movies: It's sense of realism is completely deflated by a nonsensical depiction of characters grabbing cameras and putting them places when/where no actual person would ever realistically think to position them.

Of course all of this could have been entertaining exploitation fare, but everything from the witless characters to the archaic-looking CG effects just kind of suck any possible fun out of it.

Falling into the usual traps of "found footage," VOODOO is a cheap, unconvincing, and rather grating horror experience.