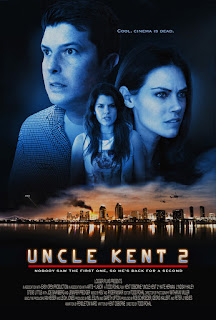 From the beginning, UNCLE KENT 2 is about as "meta" as it gets. Ostensibly a sequel to Joe Swanberg's 2011 mumblecore film UNCLE KENT, this film begins with writer Kent Osborne (playing himself) writing the script to the very movie we're watching. A significantly stoned Kent rides his bike over to Swanberg's home to try and convince the director to collaborate with him again, but Swanberg has no interest in sequels. However, he suggests that Kent find another director, as he feels the "character" of Uncle Kent belongs to Kent and not him.

So ends the first 12 minutes of UNCLE KENT 2, which were directed by Swanberg. And so begins the movie proper, directed by Todd Rohal. There are animated kitties. And a post apocalyptic riff that reminds one of Bob and Doug McKenzie's movie-within-a-movie in STRANGE BREW. Kent reads Ray Kurzweil's book 'The Singularity is Near' as he travels to San Diego Comic Con, and the movie eventually turns into a sci-fi comedy depiction of  "simulation theory" (the notion that what we think of as reality is really just a computer simulation).

It's all very weird, but kind of funny and engrossing, too. Not for everyone, it goes without saying, but given the obviously low (really low) budget, it doesn't really have to be. It achieves what it sets out to do, and does it in less than 90 minutes. It's kind of like a slacker version of THE MATRIX. I liked it. 3 out of 4 stars.
Posted by Bob Ignizio at 12:09 AM