The Love Witch (February 9th and 11th at the Cleveland Cinematheque)

[THE LOVE WITCH screens Thursday February 9th and 8:30 pm and Sunday February 11th at 9:40 pm at the Cleveland Cinematheque.] 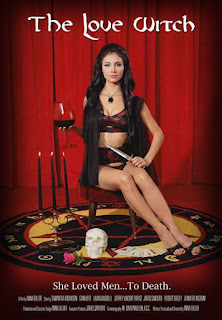 Simultaneously garish and cheap, the exploitation films of the late Sixties and early Seventies - particularly gothic European horrors -- were filled with lusty, bloody women, who were almost always relegated to being prey for some creature (often with strong sexual overtones) or to being villainous eye candy.

The young, witchy heroine Elaine (played by the gorgeous Samantha Robinson) is seductive, dangerous, and sexually aggressive, but she is also a woman who operates from an outdated "Stepford Wives" standard of femininity. She uses her powers almost exclusively to find and to please men. She believes that this should be the ultimate goal for any woman.

Elaine embodies a dark beauty, violent prowess, and an almost supernatural confidence in herself, like most of the vixens from that film era. Yet, this character is constructed as a fully fleshed out woman who is not always very likeable. She is lonely, flawed, and sometimes even pathetic, but this all makes her more real and complex than those hellcats in old exploitation pictures.

Biller takes it a step further and portrays many "how-the-sausage-is-made" moments that are usually off limits in the somewhat idolized female characters of that time. Elaine's striking, long hair turns out to be just a wig, and she - dare I say it - even uses tampons!

In a subplot that brilliantly pays off, Elaine's cocky front may actually just be hiding a fragile psyche and a slowly loosening grip on reality, perhaps even some form of mental illness.

On the surface, the visuals rather gloriously capture the look of the late Sixties, but several subtle blips are dropped throughout the film -- modern cars, a cell phone -- that make it clear the story is indeed set in modern times.

It is an anachrostic gimmick that cleverly reflects Biller's examination of where romance now stands since the mid-century Women's Liberation days. Much like the incongruous aesthetic, the tone is appropriately hokey and dated at times, but this belies the film's clever insights into the contemporary battle of the sexes, leading to a somewhat sad but poignant ending.

Biller seems to place much of the blame on the current state of "women in love" on women themselves. Elaine is her own worst enemy, and quite literally she sabotages the only thing she really wants. In a broader sense, Biller seems to say that many of our modern relationships are ruined by our own unrealistic expectations, and that our preoccupation with the fantasy of love often corrupts the reality.

Biller not only helmed this ship, but she also served as producer, art designer, and production designer. She created the retro costumes, decorated the pitch-perfect sets, and wrote the music. Clearly, this is was a passion project for her, and she knocks it out of the park on almost every level.

Certainly though, some of the visual success of the film must be credited to cinematographer M. David Mullen. His excellent use of fast zooms, prismatic lenses, and hallucenogenic, brightly-hued lighting all perfectly capture the style of that era of filmmaking.

Respectfully paying homage while still subverting the old witchcraft cliches, THE LOVE WITCH is a visually stunning, rainbow-colored slice of the psychodelic era, in all of its chain-smoking, blue-eye-shadowed glory. Yet behind its exploitation-mimicking facade lies a decidedly modern parable.

Now that we all have more power than ever to find a love that is right for us, are we strong enough to actually make it work? 3 1/2 out of 4 stars
Posted by Unknown at 12:00 AM