The Land (now on video) 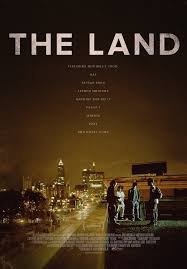 Let me put it this way: THE LAND, directed by Baldwin-Wallace graduate Steven Caple Jr. – and shot entirely and impressively in Cleveland - is technically superb  and put together in a highly attractive and lyrical manner.  Yet for Christmas I sent it to a friend (you might know her if I mentioned her name) who recently left the Cleveland area for a fresh start and marriage in New York state. My accompanying Christmas card hoped that the movie would provide her with even more reason for gratitude that she and her son got out of this vicinity safely.

That’s because THE LAND - which made it to Sundance, no less, and now has a video release via tony label IFC Films - is a street-crime melodrama, slickly shot in some of the shabbier parts of Cleveland. Which is really saying something, shabby-wise. Here are well-compose stages found in situ via our iron bridges, glittering night skyline, rooftops and old brick buildings testifying to a bygone era when industry boomed here, but set against a downbeat tale of slum desperation and young innocence lost.

I don’t think many Cleveland-hyping T-shirts were sold at Sundance, don’tchyaknow?

(Then again, the Cavs won later in the year, and that turned everything around, right?)


In a bit of a coup, Caple enlisted the production talents and occasional small onscreen roles of hip-hop artists Erykah Badu (pretty much turning in the same stock junkie role that Canton’s Macy Grey held in TRAINING DAY), Nas, and Machine Gun Kelly (MGK showing some charisma indeed in the CLERKS-type bit part as a gas/convenience-store clerk).

They hijack cars for easy cash. When the trio happen to take a vehicle holding a fortune in ecstasy pills, they run afoul of a drug kingpin…or rather, a queenpin, a matronly woman criminal (Linda Emond) who operates her empire under cover of a food stall at what viewers will easily recognize as the West Side Market.

Emond really does work wonders preventing her farfetched characterization of a feared criminal mastermind/hash slinger from completely sliding into camp. One can’t really fault any of the performers, as the young carjackers, who pin their hopes for a brighter future on a longshot entry into the pro-skating circuit (thus the crime sprees, to raise money for entry fees) pay the price and find themselves unable to transcend the environment.

The payoff comes in a more elegantly subtle and muted fashion than I’ve come to expect from earlier specimens of “hood” flicks violently racking up body counts and the agonized thesping that was so well parodied by the Wayanses in DON’T BE A MENACE TO SOUTH CENTRAL WHILE YOU’RE DRINKING YOUR JUICE IN THE HOOD.

One part I found rather unintentionally amusing, a sardonic way. The youthful protagonists’ MO is to smash unprepared drivers across the face with their skateboards, then taking off with the stolen vehicles. The message, at least for me, was that Cleveland is sooooo poor (HOW POOR IS IT?) that the thugz can’t even afford gunz to threaten their victims with. So the skateboards pull double-duty.

More reason the police should never have opened fire on Tamir Rice. A Cleveland kid actually brandishing a firearm? No one’s got that kind of largesse around here; a giveway Tamir was just packing a toy.

Me, I think I would have been quite pleased to take up welding. Who knew there was any such healthy industry like that left around here? (3 out of 4 stars)

Posted by Charles Cassady Jr. at 2:41 AM