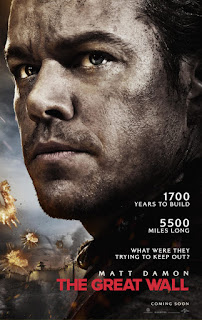 Critically acclaimed Chinese filmmaker Zhang Yimou delivers a fantasy epic in which color-coded warriors and a grungy looking Matt Damon do battle with hordes of CGI monsters in the most expensive film ever shot entirely in China, THE GREAT WALL.

Mercenary William Garin (Damon) and his Spanish friend Pero (Perdo Pascal) are all that's left of a band of warriors hoping to get their hands on some of China's rumored super weapon, a mysterious black powder (gun powder, natch). Instead they stumble into a centuries-old battle between Chinese soldiers manning the Great Wall of China and some vaguely defined space monster dragon things that can only be killed by shooting them in the eye. And for some reason magnets make them zonk out. How does that work? I don't know, ask Insane Clown Posse.

Garin gets a love interest/battle buddy in the form of bungee-diving spear maiden Commander Lin Mae (Jing Tian). She provides the warrior for hire with a reason to fight beyond personal gain. On the other hand, shifty westerner Sir Ballard (Willem Dafoe) offers temptation, promising all the black powder they can carry and an escape from what seems like a hopeless battle. Will the roughhewn scoundrel take the easy way out, or will he redeem himself? What do you think?

We're a long way from JU DO and RAISE THE RED LANTERN here, folks. Of course, this isn't the first time Zhang Yimou has dabbled in commercial genre material. Since 2002's HERO, Yimou has alternated between more serious dramas and crowd pleasing martial arts adventures. The difference is, Yimou's previous martial arts films still had a sheen of respectability about them. THE GREAT WALL, on the other hand, is full-on, unapologetic cheese.

There are still some of Yimou's signature touches, notably his rich, vibrant primary color palette. But honestly, hiring someone of Yimou's caliber to direct and spending around $150 million to make such nonsense seems kind of ridiculous. Paul W. S. Anderson or the UNDERWORLD production team could have cranked this out for about a third of that sum, and the quality would not have suffered noticeably.

Max Brooks, author of the book 'World War Z', came up with the story in collaboration with producer Thomas Tull. Another 5 writers are credited on this thing, which is kind of mind boggling given considering how by the numbers the final product is. It's dumber than a bag of hammers, but if you like cheesy monster movies, it will probably do the trick for you. And with Yimou at the helm and a solid cast, it has better production values and acting than it deserves. 2 ½ out of 4 stars.