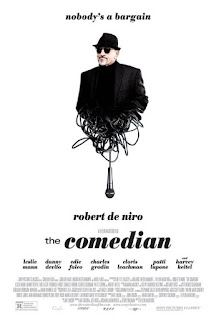 I have come to think of certain Hollywood comedies as being like big, dumb, eager-to-please dogs (Golden Retrievers come to mind, no offense to that friendly breed). THE COMEDIAN, starring Robert De Niro as an aging insult comic, is one such dog. Unlike many of my film-critic colleagues, I don't deplore these movies for their lack of excellence — I appreciate them for what they are, escapist pap with some well-known actors that deliver a few laughs.

De Niro plays Jackie Burke, a 67-year-old comedian who is most famous for starring in a long-running sitcom, “Eddie's Home.” Thirty years later, wherever Jackie goes, fans approach him and insist that he “do Eddie” and recite the character's asinine catchphrase.

Naturally, Jackie hates this. His abrasive personality and vulgar standup routine are worlds away from the dumb sitcom that made him famous. “Eddie's dead,” he says to the audience at a comedy club in Hicksville, New York, where he leads off his set with, “Let's talk about this abortion of a town you live in!” The show ends in disaster after Eddie gets in a fistfight with a heckler, who is filming the incident for his webcast. One of the movie's persistent themes is the clash between new media (viral videos, reality TV, webcasts) and the old-line entertainment world (TV, standup, comedy LPs, the Friars Club) from which Eddie and his comedy cronies sprang.

Jackie's long-suffering agent, Miller (Edie Falco in an unrewarding part), has a hard time booking Jackie into anything but cruises, autograph conventions and TV oldies shows, alongside the likes of Jimmie Walker and Brett Butler. His prospects further dim after the heckler he assaulted presses charges and an unrepentant Jackie is sentenced to 30 days in prison and 100 hours of community service. The video of the attack, of course, goes viral, and Jackie is kidded relentlessly by fellow comedians about his brush with the law.

Jackie goes to work at a New York homeless shelter, serving meals and handing out clothes along with raunchy jokes. At the shelter, he meets the cute, hot-tempered Harmony (Leslie Mann), who is performing community service for assaulting a cheating lover. Harmony is the daughter of Mac (Harvey Keitel), a real-estate developer who gives off Mob-type vibes. Daddy Mac wants Harmony to serve out her sentence at a retirement home he owns in Florida. She defies him by staying in New York and dating Jackie, whose rude humor appeals to her (Daddy issues?).

Jackie courts Harmony by taking her to comedy clubs, where we are treated to jokes by a number of young comedians, many of them very funny. As for Jackie's comedy, it is audacious without being actually funny. (Jeff Ross and Lewis Friedman wrote the comedy routines, while Art Linson and Richard LaGravanese wrote the dramatic scenes.) A comparison of De Niro's lackluster portrayal of a standup comic to his manic Rupert Pupkin in THE KING OF COMEDY (1983) is a study in the multi-decade decline of De Niro's post-Scorsese acting.

Also in Jackie's life is his brother, an unnamed character played by Danny DeVito. The brother owns a delicatessen and tolerates Jackie's abrasive personality. Jackie's sister-in-law Flo (Patti LuPone), loathes Jackie. When Jackie approaches his brother for a loan, he is pressed into attending his niece's wedding (to another woman).The wedding scene may be the dumbest thing in the movie, and that's really saying something. Jackie's niece, who's a big fan, asks her uncle to stand up and tell some jokes. Jackie, true to form, makes a bunch of tasteless lesbian sex jokes, to his niece's delight and the Producers-style disgust of most of the guests. The situation escalates, and Flo and Harmony, who attends as Jackie's date, nearly come to blows.

Directed very conventionally by Taylor Hackford, the movie is a collection of potential story lines, any of which could have been interesting if developed. There is the story of the has-been comic, reduced to fan conventions, flummoxed by new media and sadistic reality TV shows, and vying with a detested rival comedian (Charles Grodin) for a place on the dais of a Friars Club roast of May Conner (Cloris Leachman), an old comedienne in the mold of Phyllis Diller. There is the Woody Allen-esque family story of the old comedian and his deli-owning brother and judgmental sister-in-law. There is also the unlikely romance between an older man and a younger woman who share anger management issues, and the angry disapproval of her vaguely sinister dad. But none of these tributaries leads to any ocean; the romance, for example, is subverted when Harmony moves to Florida. Her decampment leads to the movie's second most embarrassing scene, in which Jackie leads a group of retirement home residents in a sing-along about “Makin' Poopie” (to the tune of “Makin' Whoopee”). Where are the Gray Panthers when you need them?

That, folks, is the level of much of this movie's humor, and it's too bad, because it's an easygoing picture featuring good actors and comedians (Billy Crystal, Gilbert Gottfried and Jimmie Walker show up, along with some good younger comics). It could, if your expectations are not high, help pleasantly pass a couple of hours. Not every movie, after all, can be a masterpiece. 2 1/2 out of 4 stars.
Posted by Pamela Zoslov at 12:11 PM