[THE 2017 OSCAR NOMINATED LIVE ACTION SHORT FILMS opens in Cleveland on Friday February 10th exclusively at the Capitol Theatre, in Oberlin at the Apollo Theatre, and in Akron at The Nightlight Cinema.] 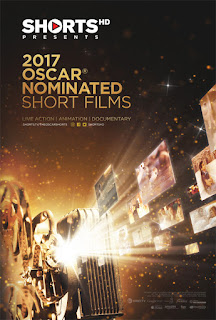 The first notable thing about this year's Oscar Nominated Live Action Shorts is that none of them are from English speaking countries. "Silent Nights", from Denmark, has about a third of its dialogue delivered in English, but other than that, it's subtitle city. Not an issue for this viewer, but I know it is for some, so if that's you, you've been warned.

Beyond that, there are a couple of themes that recur in the nominees. Two of the nominated films deal with immigrants and/or refugees. It's hard to imagine a bigger issue both here in American and abroad, so that's hardly surprising. On the lighter side, there are also two films about people connecting in unusual ways. In one film, modern technology helps facilitate the connection; in the other, modern technology is scorned, at least at first. And finally, we have one film which celebrates rebellion against an authoritarian figure. My thoughts on each film individually follow.

Easily the most dramatic of this year's nominees, the French short "Enemies Within" concerns the efforts of an Algerian (even though it was France when he was born there, his father opted for Algerian citizenship for himself and his family after the war) to become an official French citizen. His efforts are thwarted by an officious prick of a bureaucrat who pursues an increasingly aggressive line of questioning. Eventually the prospective French citizen is forced into a position where he must make a hard moral choice, one compounded by threats against his family.

This could easily have been a stage play, but these are not stage actors. Much is communicated by the faces of the two main cast members, and through their body language. The direction by Selim Azzazi, who also wrote the screenplay, is taut and suspenseful.

"Enemies Within" is minimalistic and powerful, with an ending that leaves things open as to whether this "extreme vetting" is useful, or if it just subjects innocents to degrading treatment. Either way, do the ends justify the means, or does it simply undercut France's own motto of, "Liberty, equality, fraternity?" Obviously this is an issue for America now, as well.

Switzerland offers up a light-hearted story of a curmudgeonly older woman finding a new lease on life in "La Femme et la TGV". The femme in question, played by Jane Birkin, lives next to the railroad tracks on which a high speed train passes by every day at the same time. And the woman is always there at her window when it does, waving a Swiss flag as the train barrels by.

One day, the woman is surprised to find a note in her yard from the driver of the train. This begins a long distance relationship as the two communicate by letters, and send gifts of cheese and chocolates to each other. Around same time, a new dance studio opens across from the woman's bakery. A cute young guy from studio tries to be friendly, but she brushes him off.

There are some twists and turns, none of which are particularly surprising. Nothing we haven't seen before, but pleasantly agreeable, nonetheless. Star Jane Birkin, who has been both a movie star and popular singer (often in collaboration with Serge Gainsbourg), is still a compelling screen presence, and the upbeat orchestral score propels the proceedings along in jaunty fashion. It may not be a great work of cinematic art, but it's hard not to like.

Denmark offers the second short to deal with immigration, and it's a far more facile affair than "Enemies Within". It concerns a refugee from Ghana who has come to Denmark hoping to earn money to send to his family back home. He winds up having an affair with a woman who works at the local salvation army. Is he just using her? Does he love her? Does it really matter in the end?

I don't know, and this short never made me care. It tries to deal with some complex emotional and moral issues, but there's no nuance or complexity. This is a message in search of a movie.  Utterly unconvincing with a cheap, unearned (would-be) tearjerker ending.

In the Hungarian short "Sing", Zsofi is the new girl at her school. It's hard fitting in, but she's excited at the prospect of joining the choir. The choir is pride of the school, known for winning many contests. Nonetheless, the principal says everyone who wants to be a part of it can be.

This is true in a literal sense. However, to insure her choir's continuing dominance, the teacher tells any student who isn't a top-notch singer to simply mime along as the rest of the kids sing. Zsofi is one of the kids told to keep quiet. When Zsofi's friend Lisza finds out about this arrangement, the girls face a choice: either go along with the ruse and enjoy the rewards, or take the risk to stand up for what's right. Fun and subversive, "Sing" sends a message that authoritarianism can be overcome with determination (and a bit of cleverness and good humor).

In the Spanish short "Time Code", a female security guard is asked to check the surveillance video at the parking garage where she works after a customer complains about a broken taillight. It turns out her male co-worker on another shift did it accidentally while dancing through the parking deck. She covers for him, and then leaves a message when he comes in for his shift. Similar to 'Le Femme et le TVG', this is a film about two people connecting without actually meeting. This feels a little more self important than 'Le Femme', but it's still reasonably entertaining lightweight fare.

"Enemies Within" was my favorite, but with the exception of "Silent Nights", I liked all the nominees in this category. Every entry felt like it really should have been a short, too. They each tell their story and convey their message in a half hour or less. Perhaps they could be expanded to feature length, but it's hard to imagine why that would be necessary. 3 ½ out of 4 stars.
Posted by Bob Ignizio at 12:00 AM