Staying Vertical (February 23rd and 24th at the Cleveland Cinematheque) 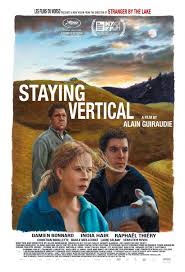 Well, I certainly haven't seen a movie like STAYING VERTICAL before. Described by many reviews as some sort of comedy, I didn't laugh much, but was consistently perplexed.

With its utterly deadpan tone, you don't realize right away that this film takes place in a reality that is at least slightly skewed. Instead you find yourself trying to follow what seems a relatively straightforward plot about a screenwriter named Leo (Damien Bonnard) suffering from writer's block.

Leo takes a drive into the French countryside to clear his head and find inspiration. He also finds both men and women there to stimulate his libido. He wants to make it with a young man named Yano (Basile Meilleurat), but his advances are rebuffed. Instead he hooks up with a female shepherd named Marie (India Hair), and eventually has a child with her.

But Marie, who already has 2 kids, isn't interested in staying on the farm or raising another child. She moves to the city, leaving Leo to stay with her father. There's also some weird plant based psychotherapy sessions and some bizarre (to say the least) situations involving the old man who lives with Yoan. The closest thing it reminds me of is a scene in Takashi Miike's VISITOR Q.

Outstanding performances, too, especially from Bonnard. As weird as things get in this movie (and they do get pretty weird), the actors are always convincing and grounded.

But is it a good film, or even a likeable one? That's harder to answer. It's certainly well made, and done with conviction. But there's also a sense that Guiraudie is pushing buttons just for the sake of getting a rise out of viewers on occasion. Still, it's a singular and challenging work, and any serious cineaste will probably want to at least check it out. 2 ½ out of 4 stars.
Posted by Bob Ignizio at 12:38 AM